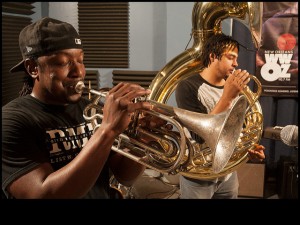 Stooges at WWOZ in 2015 [Photo by Ryan Hodgson-Rigsbee] 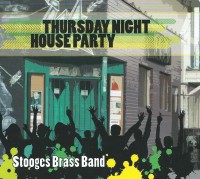 Stooges at the Hi-Ho [Photo by Ryan Hodgson-Rigsbee]

Stooges Brass Band is equally at home in the streets, the club, and the studio. On their latest, Thursday Night House Party, they pay respect to the street and the club while bringing that celebratory atmosphere to the studio.

The album has an unexpected opener with a short and sweet version of the song most Americans associate with brass bands, 'The Star-Spangled Banner.' The funk gets rolling on the second, title track, 'Thursday Night House Party.' The excellent musicianship and tightness of the Stooges is particularly showcased on 'Doin' My Job,' 'Oh No,' and a sexy 'Make 'Em Say Ooh.' Mid-way through this 11-track release, the group fits in another surprise with a beautiful rendition of 'Amazing Grace' that starts off mournful and slow then pops out.

Known for their innovative blend of traditional New Orleans brass sounds, contemporary jazz, and hip-hop beats, The Stooges' sound has evolved since they first came onto the scene in 1996. They won the "Red Bull Street Kings: Best Brass Band" competition and "Best Contemporary Brass Band 2011" at the Big Easy Music Awards. In 2012, they served as national cultural ambassadors and were employed by the US Embassy to tour Pakistan, Kyrgyzstan, and Tajikistan. And sports fans take note-- when you hear brass band music on ESPN, it's probably the Stooges. They started working with ESPN's music department in 2007, reworking their theme songs for College Game Day, Sports Center, and more.

As with many New Orleans brass musicians, there's a history here. As Stooges founder Walter "Whoadie" Ramsey told the Gambit in 2010, " “My grandfather was one of key people with Dirty Dozen. He was a fly percussionist. And my dad was the president of social aid and pleasure club called the ‘Scene Boosters’, one of the most popular clubs back in the day.” The foundation was there but the real spark was lit for him while watching Rebirth as a young student. “Seeing [Rebirth] in elementary school blew me out the water. That's when I said ‘I want to do that!’ From that day forward, I tried to put a brass band together. It didn’t happen until I got to high school. I used to trade instruments until I got every one of them. I just didn’t have the musicians to play them."

Above all, Thursday Night House Party is another hot album from one of the top brass bands in the city. Get this one if you want to dance to some of the best brass music in New Orleans today. It's available on mp3 and CD from the Louisiana Music Factory, iTunes, CDBaby, and Amazon.

Find their upcoming local appearances by checking our online Livewire Music Calendar or on the Livewire app (iPhone only).