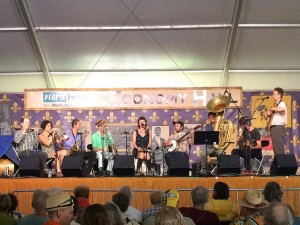 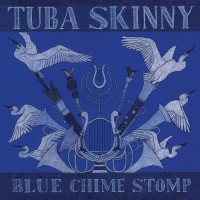 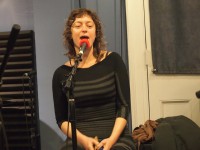 Erika Lewis of Tuba Skinny at WWOZ in 2014

Tuba Skinny is a traditional jazz band that formed in New Orleans in 2009. Since then, the group has evolved from a loose collection of street musicians into a solid ensemble dedicated to bringing the traditional New Orleans sound to audiences aroud the world. Drawing on a wide range of musical influences—from spirituals to Depression-era blues, from ragtime to traditional jazz—their sound evokes the rich musical heritage of the Crescent City.

Tuba Skinny recently released their seventh album, Blue Chime Stomp. It was recorded in April 2015 at the Tigermen's Den (3113 Royal) on 4-track and includes multiple traditional and original songs. Each song on this album is like stepping into the time machine back to the early days of jazz. It opens with a beautiful version of 'Maple Leaf Rag' and goes on to feature Shaye Cohn's (cornet, piano) original composition, 'Blue Chime Stomp' and Erika Lewis's (vocals, bass drum) 'Broken Hearted Blues.' Lewis's impassioned voice also flies on 'Corinne,' 'Almost Afraid To Love,' 'I'm Blue and Lonesome' and Memphis Minnie's 'Me and My Chauffeur.'

Tuba Skinny will perform at dba on Saturday, June 4 and Saturday, June 11 from 7-10p. For other local appearances, check our Livewire Music Calendar. Blue Chime Stomp is available for download and streaming from Bandcamp and will be available on vinyl from Euclid Records at some point in the future.