Authored by:
Carrie Booher
Published on: May 3rd, 2016 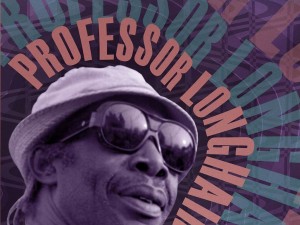 "There have been any number of official and semi-official 'live' Professor Longhair recordings issued since the pianist’s untimely passing in 1980, but this record offers incontrovertible evidence of the power and drive of the mid-70s edition of Fess’s band with Billy Gregory featured prominently on guitar." -John Sinclair

It's not every week that a new release from a long-deceased New Orleans legend comes out but it did happen in April with the much-anticipated Live in Chicago from Professor Longhair. The eight track album was recorded during his set at the Chicago Folk Festival in 1976 and showcases Fess in peak form. Orleans Records, the label that released this live set, has an in-depth biography on Professor Longhair and more information about this particular release, written by John Sinclair, on their website.

Live in Chicago opens up with an energetic 'Doin' It' and moves on to an even more upbeat 'Big Chief.' Fess's band, consisting of Billy Gregory on lead guitar, Will Harvey on rhythm guitar, Julius Farmer on bass guitar, and Earl Gordon on drums, is also fantastically tight, particularly on 'Mess Around' and 'Every Day I Have The Blues.' The clarity and vividness of 'Mardi Gras in New Orleans' shines and Gregory flies on 'Got My Mojo Working.' Fess is amazing throughout, with the reasons why he's a legend of New Orleans piano all coming out at once on 'Fess's Boogie.'

Live recordings can be tough to pull off but the engineer on this one did an amazing job. It was originally broadcast on WFMT in Chicago from the University of Chicago's Folk Festival and later remixed by Gregory. With Fess and his band in top form and a recording engineer with the capability to capture it, this is a live release that many fans of Professor Longhair didn't know they were waiting for.

Live in Chicago is available on mp3, CD, and vinyl from the Louisiana Music Factory, Amazon, and iTunes.