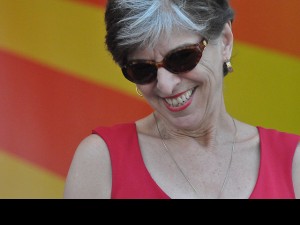 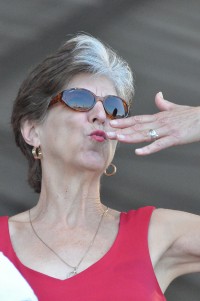 Ball blows a kiss to the crowd at Jazz Fest 2012 [Photo by Kichea S. Burt] 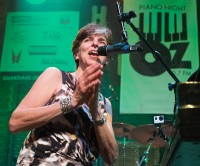 Grammy nominee Marcia Ball is one of the most accomplished and fun live performers in New Orleans today. Ball knows how to raise roofs and tear down walls with her infectious, intelligent and deeply emotional brand of southern boogie, rollicking, roadhouse blues and heartfelt ballads. Over the course of her three-decade career, Ball has earned a huge and intensely loyal following all over the world. Her exquisite piano playing and passionate, playful vocals fuse New Orleans and Gulf Coast R&B with Austin's deep songwriting tradition into a sound No Depression described as "a little rock, a lot of roll, a pinch of rhythm and a handful of blues."

Ball was born into a musical family. Her grandmother and aunt both played piano music of their time and Ball started piano lessons when she started school and showed an early interest in New Orleans-style piano playing, as exemplified by Fats Domino, Professor Longhair, and James Booker. She has named Irma Thomas as her chief vocal inspiration. Ball studied English at Louisiana State University in the 1960s while playing in a band called Gum. In 1970, at age 21, she started a progressive country band called Freda and the Firedogs in Austin, TX, and began her solo career in 1974.

Ball's piano style includes elements of zydeco, swamp blues, Louisiana blues, and boogie woogie. She began her recording career as a solo artist with Rounder Records in the 1980s and early 1990s. In 2001, she joined the Chicago-based Alligator Records. Her Rounder album, Sing It!, which featured vocalists Irma Thomas and Tracy Nelson, released in January 1998 was nominated for a Grammy and a Blues Music Award for "Best Contemporary Blues Album." Ball received the 1998 Blues Music Award for "Contemporary Female Vocalist of the Year" and "Best Blues Instrumentalist-Keyboards."

She was awarded "Contemporary Blues Album of the Year" for her albums Presumed Innocent (2002) and So Many Rivers (2004). The same year she also won "Contemporary Blues Artist of the Year-Female." She won the "Best Blues Instrumentalist-Keyboards" again in 2005, 2006, 2007 and 2009. The BMA for Keyboards has since been renamed the Pinetop Perkins Piano Player Award and Marcia has won that in 2012 and 2015. Her 2003 Alligator release, So Many Rivers, was nominated for a Grammy as were Live! Down The Road (2005) and Peace, Love & BBQ (2008). She was inducted into the Austin Music Hall of Fame in 1990 and the Louisiana Music Hall of Fame in 2012.

Ball continued to work with Thomas. In 2006, the two contributed a duet ("Look Up") on the New Orleans Social Club release, Sing Me Back Home (Burgundy Records/Honey Darling Records). In 2007, the two contributed another duet ("I Can't Get New Orleans Off My Mind") to Goin' Home: A Tribute to Fats Domino (Vanguard Records). She continues to play at nightclubs, particularly in Austin and New Orleans, and performs at music festivals in North America and overseas.

In May 2015, Ball continued her critical success with another 'Pinetop Perkins Piano Player' award at the Blues Music Awards ceremony. It was the sixth time she's been bestowed with that honor.