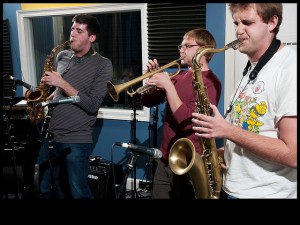 Naughty Professor at WWOZ in 2013 [Photo by Ryan Hodgson-Rigsbee]

Naughty Professor is a New Orleans-based funk/jazz collective. The group's latest album, In The Flesh, is comprised of live audio, behind-the-scenes tour footage, and more. For a group known for their high-energy performances, an album featuring live cuts is a wise choice. Fans of Galactic, Big Sam's Funky Nation, and George Porter, Jr.-- check this one out.

In The Flesh is available for free download on BitTorrent and is the first wave of audio/video releases expected to come from the band this year. Naughty Professor's already had a busy spring. In addition to their recent performance at YLC's Wednesday at the Square (also live broadcast on WWOZ), they're also in the midst of a tour of the Midwest, east coast, and south through the end of April.

In The Flesh is full of rocking brass, funk, and jazz, with many songs rising over seven minutes. It opens with organized chaos on 'Chef's Revenge,' which captures the vibe of a man overworked and underpaid yet still passionate about the essence of his work. 'As They Say In The Biz' flies with quick, funky drumming; the sense of franticness conveyed in the first part of the song evolves into psychdelic Hendrix-esque guitar in the latter part.

A fast and heavy bass line opens up 'Brain Storm,' and the underlying deep and varied emotions that run through nearly all the songs on the album is well portrayed. 'Prune Juice' takes on a different, smoother vibe. 'Knockwurst' starts with a wah wah pedal effect, then gets even wilder. 'Elephant Hunt' and 'Elbow Soul' have a suspenseful, movie soundtrack-worthy sound. The album closes with the fast and free 'Six Paper Joint.'

Naughty Professor will be performing locally at the Fools of April Festival on April 3, at the Blue Nile on April 8, and at French Quarter Fest on April 9. See their full tour schedule at their website.