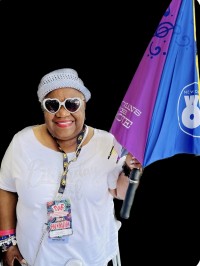 New Orleans culture bearer and activist Barbara Lacen Keller has died at the age of 76. She had been a valued member of the Board of Directors of WWOZ since 2021; and of the New Orleans Jazz & Heritage Foundation, where she was elected to the Advisory Council in 2016, and onto the Board of the Foundation in 2019, where she served as Chair of the Advocacy and Equity Committee. and also with the Gala Committee.

Barbara's mother was Augustine "Miss Teen" Germaine Lewis, who in the 1940s was the only Spy Girl Mardi Gras Indian in New Orleans. In the 1950s Barbara herself masked as the Little Queen of the Cheyenne tribe.

She was a very active figure in New Orleans' cultural community, including serving on the boards for the Preservation Resource Center of New Orleans and the Dryades YMCA. She was an original member of the Lady Buckjumpers, and also founded the New Orleans Social Aid & Pleasure Club Task Force. She was a charter member of the Femme Fatale Mardi Gras krewe, serving as one of the first float captains, and was currently serving as chaplain.

She was involved in politics, as a means to improve the lives of people in New Orleans and across the country. For many years she worked for the City of New Orleans, as the Director of Constituent Services for Council District B Councilwoman Stacey Head, and also later in Mayor LaToya Cantrell's Office of Cultural Economy. She was fondly nicknamed "the Mayor of Central City," for all her work in that neighborhood. In 2012 she proudly served as a Barack Obama delegate to the Democratic National Convention in Charlotte, NC. She was a Mellon Community Fellow at Tulane University, mentoring graduate students in community relations.

The "Lacen" part of her name came from her marriage to Anthony "Tuba Fats" Lacen, one of New Orleans' most famous musicians, who was also Wild Man of the Wild Magnolias Mardi Gras Indian tribe. Their August 1980 wedding in Armstrong Park was the first wedding to take place in the park. Tuba Fats passed in 2004.

One son predeceased her in November of 2022. She is survived by three daughters, four grandchildren, and one great-grandchild.

Barbara was a true Guardian of the Groove, and for decades was an important and successful advocate for culture bearers and musicians in our city. From the entire WWOZ family, our thoughts and best wishes go out to all Barbara's family and friends. She is now a Guardian Angel of the Groove, and will be greatly missed.