On The Road With Bill Mullen 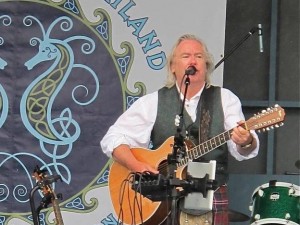 In the late 1950s and early 1960s, Ewan MacColl, Peggy Seeger, and Charles Parker redefined radio documentaries with The BBC Radio Ballads. At a time when Received Pronunciation (RP) was all the rage, The Radio Ballads told the stories of little known communities, interweaving the recorded voices of the working people in those communities with songs written by MacColl. These songs were inspired, and often sang, by the coal miners, travelers, fishermen, and railway workers that made up the communities illustrated by each Radio Ballad. One such song, Thirty Foot Trailer, was heard for the first time on April, 17, 1964, and illustrated the lives of gypsies and tinkers in the U.K. and Ireland, and the joys and difficulties of living one’s life on the road.

But for 60-year-old Scottish folk singer and multi-instrumentalist Bill Mullen, living life as a travelling musician has always been his dream, and, since 2013, he has followed that dream wherever it has taken him.  This weekend, Mullen’s personal road will bring him to New Orleans to play the Irish House on St. Charles Avenue as part of New Orleans Celtic Festival, a three-day series of Irish-themed events at the pub.

A native of Dundee, Mullen’s passion for Celtic music began when he was just 11 years of age, and even after forging a long-time career in IT, he never lost sight of his first love.  After graduating in 1975 from one of the very first IT courses, he worked in that field for almost a decade in Dundee and Aberdeen, after which he lived and worked in the Netherlands for more than 20 years. In 2007, he moved to the U.S. to take up a position with Nike.

“I played in a band in Dundee, and in Holland,” said Mullen. “When I was working for Nike, I missed playing music, so I started playing on my own at local pubs. After working all week in IT, I would be very tired, but on Friday, when I set up in the pub and started to play, the energy that I would get just took me back to what I really wanted to be doing – playing music. And so I quit IT.”

Mullen sold his home in Portland, bought a 35-foot Fifth Wheel, hit the road with his wife Dorothy, and never looked back.

“Playing music is the ultimate freedom,” said Mullen. “I am at the age where I am seeing friends and colleagues dropping off, and I would hate to be at the end of my life saying I wish I had gone out and played music full time. There is always that voice of doubt at the back of your mind saying that there are a million reasons why you can’t do something.  But then you realize if you really want to do something, you can find a way to make it work. With money, you have to have enough, but when it comes to time, you don’t get any more. So you have to choose what you want your life to be.”

More information about Bill Mullen is available at: http://www.bill-mullen.com/

More information about The Irish House is available at: http://www.theirishhouseneworleans.com/