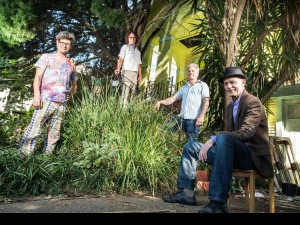 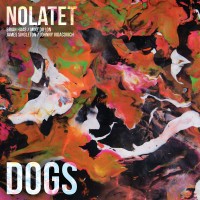 After years of collaboration on various projects, Mike Dillon, Brian Haas, James Singleton, and Johnny Vidacovich have finally come together for an official release as new quartet, Nolatet. Their debut album, Dogs, will be released Friday, February 26 on Royal Potato Family.

Vidacovich (drums) and Singleton (bass) have performed together since 1977 and backed some of the most influential and talented names in jazz and New Orleans R&B-- Dizzy Gillespie, Professor Longhair, and James Booker, to name a few. Dillon (vibraphone) and Haas (piano) have shared bills and sat in with each others' bands for over twenty years. “Musically speaking, the Nolatet is fearless. The music ebbs and flows effortlessly, like rebirthing an amoeba,” explains Dillon. “We have one of the all time great New Orleans rhythm sections in Johnny Vidacovich and James Singleton. Like any great rhythm section, they make you find parts of yourself that you never knew existed. With that as our foundation, there’s no telling how far the music can expand with each performance.”

Dogs was recorded in one day at New Orleans' Esplanade Studios, all on first or second takes with no overdubs, with a mostly improvisational technique. This seven-track album focuses on original material influenced by the musicians' lives and perceptions. With a wide range of ages in the group (spanning thirty years), the music takes on a multi-generational sensibility from an array of experience and perspectives.

“When music is truly happening, it leads the way. When music is kinetic and meaningful, it sets its own agenda. When music is meant to be played, the music itself will find a way,” says Haas. “This is how the Nolatet came into being. After so many incredible nights of collaborating over the years, which led to a a deep, enduring friendship, the music simply demanded it.”

See the premiere of video for the title track, "Dogs" plus two more from the album, "Pops" and "Bongo Joe" below.

Dogs is available for purchase on CD, vinyl, and MP3 from their label, Royal Potato Family, iTunes, Amazon, and Louisiana Music Factory.

Nolatet will be performing at Snug Harbor on Sunday, February 28 at 8p and 10p. WWOZ will be broadcasting live from the 8p show. The Snug Harbor appearance is also the launch of Nolatet's national spring tour, which takes them through the east and west coasts, plus dates in North Carolina and Atlanta. They'll return to New Orleans at the end of April to perform at Gasa Gasa on April 26 and the Marigny Opera House on April 29.