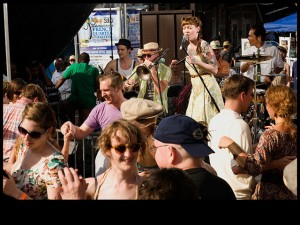 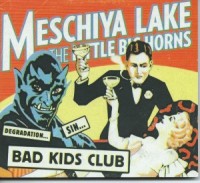 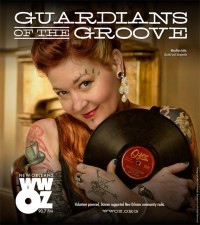 Meschiya Lake & the Little Big Horns have done it again on their latest, Bad Kids Club, led by Lake's powerful, passionate voice. Lake and her band got their start playing on Royal Street, then moved into the clubs, and now frequently tour Europe, performing in front of sold-out audiences. Last spring, they played to a packed Jazz Tent at the New Orleans Jazz & Heritage Festival-- just their fourth appearance at the event.

You get your money's worth on this 14-track album, which opens with the playful 'Anytime is Saturday Night' and ends on the same note with 'Scotch,' an ode to the famous whiskey. The band, made up of Jason Jurzak on sousaphone and bass, Charlie Halloran on trombone, Russell Welch on guitar, and Mike Voelker on drums, sounds especially tight on 'That Chick's Too Young to Fry' and 'Big Nose Stand.' Big band/swing influence shines through on '24 Robbers' and 'Communication.' The record takes a bluesy turn on ''lectric Chair Blues' and the sexy, slow 'Hey Mary Wanna.' Lake shows her range with an unexpected but fitting cover of Loretta Lynn's 'You Ain't Woman Enough To Take My Man.' Lake and her band show the depths of their knowledge through song choice, most notably on the lovely and unusual 'I Wonder Who's Kissing Her Now' from 1909.

Multi-time winner of 'Best Female Vocalist' and 'Best Traditional Jazz Artist' at OffBeat Magazine's "Best of the Beat" Awards, Meschiya Lake & the Little Big Horns are some of the finest performers in New Orleans today. This is a grassroots band that created all of their own opportunities and successes, led by the incredibly focused and concerted efforts of Lake's vision. Which is not to say they take themselves too seriously-- see the video below for 'Brand New Funk,' one of the last tracks on Bad Kids Club. King James & the Special Men, another band championing the classic sounds of New Orleans, join forces with the Little Big Horns for this fun song.

Bad Kids Club is available on MP3 and CD from CDBaby and on CD from the Louisiana Music Factory.