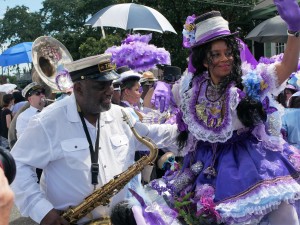 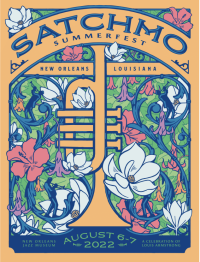 Temperatures are (way) up in New Orleans and that means that Satchmo SummerFest presented by Chevron is only a few weeks away! The festival dedicated to the life, legacy, and music of Louis "Satchmo" Armstrong returns to the New Orleans Jazz Museum on Saturday, August 6 and Sunday, August 7, 2022. There will be live music, a speaker series, food, dancing, and fun for all.

Festival attendees can pre-purchase tickets online starting today. Tickets are $7 in advance or $10 onsite per day. Children 12 and under are free. Admission also provides access to the Jazz Museum's collection and exhibitions, plus the Satchmo Legacy Stage in Memory of Joni Berry featuring discussions and presentations by world-renowned Armstrong scholars.

On the Satchmo Legacy Stage in Memory of Joni Berry, scholars and historians will present on a wide range of topics surrounding all things Louis Armstrong from 1-5pm each day. Festival favorite and GRAMMY® Award winner Ricky Riccardi, Director of Research Collections for the Louis Armstrong House Museum and Archives and the author of What a Wonderful World, will return with a host of all-star scholars. Enthusiasts and novices can dive deep into the life and legacy of Armstrong and learn of his humble beginnings and tenacity with presentations such as Peter Davis, the Music Master of the Great Louis Armstrong, with Dr. Robert S. Mikel a native New Orleanian and decorated educator with research works and interest in multiple fields of study including early New Orleans Jazz, as well as a very special interview with Jewel Brown, who was a female vocalist with Armstrong’s All-Stars from 1961-1968.

The Jazz Mass at St. Augustine Church will begin at 10am on Sunday followed by a Second-Line parade to Satchmo SummerFest from the Treme neighborhood and through the French Quarter. Due to ongoing renovations at St. Augustine Church, mass will be held in the Parish Hall. Please note that space and seating is limited. The mass will be livestreamed on Facebook.com/saintaugchurch.

Looking for information that's not included here? The official festival website with all the latest info is satchmosummerfest.org!