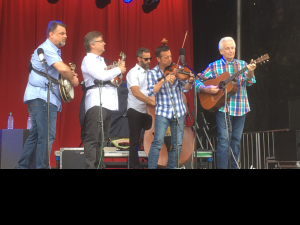 DelFest 2022 day one opens with a bang, but luckily, no splash! With the threat of rain looming all day the 14th DelFest kicked off the with a bang on Friday and the rain held out until midnite for a day one of explosive music. The first highlight of the day was the opening sound check by festival host The Del McCoury Band. Del was beyond happy to be back on the fairgrounds and was full of jokes and banter, which brought much needed laughter, but it was the picking and the music that lit up the crowd. They went through a set that included standards, classics and several tunes from their most recent record, Almost Proud, released in February of this year.
Next up would be the winners of the Band Scramble that took place Wednesday at the DelFest Music Academy. The winning band was The 2 Jay Morning Band. They performed Forty Years of Trouble, which was executed with precision and perfection.
Fireside Collective was next, of which a couple members were past DelFest Music Academy students. Their bluegrass, jazzy, jamgrass really electrified the crowd and got them ready for third act of the day, New Orleans' own Anders Osborne who is currently touring with Jackie Greene. The duo would swap songs for the entire set, opening with the Anders classic “Back on Dumaine”, with Jackie laying down some beautiful keyboard work. This set built on the energy and set it up for Robert Earl Keen to come out with a powerful closing set on the mainstage for day one. A light rain began to fall as the music wrapped up on the for the night.
Down to the music hall we went for the post midnite, late night set by Leftover Salmon, who welcomed several guests including Ronnie and Robbie McCoury and Jason Carter. Leftover recently added dobro player and keyboardist Jay Starling to the band, this seems to have reignited the band once again. For a band that has been touring for over 30 years they still pack the punch and bring a bang to the festival crowd like no other band can do it. They played a blend of classic bluegrass and some old and new gems from their catalogue. What a great way to close out day one and there was a very soothing rain falling for our walk back to our campsite.