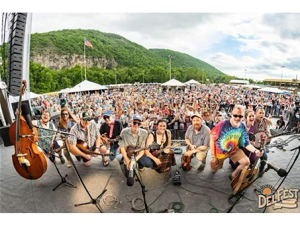 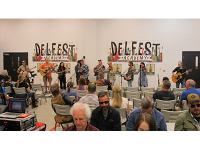 I can’t find words to describe my emotions when I arrived to the Allegany County Fairgrounds for the 14th DelFest after 3 long years, but happy, joy and relief come quickly to mind. I chose to arrive several days early as a guest of the DelFest Music Academy, which has  taken place at every DelFest since  2009. The academy is a music school that is held from Sunday-Wednesday before the festival’s official kick off on Thursday.  This was the
third time I’ve had the opportunity to be a guest of the academy, giving me the chance to see the dedication and camaraderie between the students and instructors develop over the time.  With the last two festivals and academies being canceled madethis year that much more special and the magic was evident. Students at this year’s academy ranged in age from 10 to 75. This year’s instructors included Robbie McCoury, Ronnie McCoury, Jason Carter, Allan Bartram, Chris Luqette, Ronnie Bowman, Matt Ledbetter, Frank Solivan, Mike Mumford, Lauren Price Napier and several other stellar musicians. A number  of the students work as professional musicians, but seize this opportunity to hone their craft with some of the masters and their heroes.

All students are assigned to  bands on the first day, with each band selecting a singer and a song, which they’ll practice for the next couple of days in their free time. On Wednesday the bands  compete in a Band Scramble where they perform their songs for the judges (the instructors). The winner of the band scramble will perform their song on the main stage on opening day.

This year there were 13 bands competing in the Band Scramble. This year’s winning band was 2 Morning Jays , performing the bluegrass tune “Forty Years of Trouble” with precision and perfection.

The Band Scramble and the daily karaoke sessions are as much an attraction for me as the festival itself. The karaoke sessions take place daily with students selecting a song and a band made up of their instructors become the karaoke machine. The student leads and directs the band through the tune, selecting their heroes to take the solos and  breaks. For many of the students this may be the highlight of their musical career so far. Karaoke takes place every afternoon, while every morning is kicked off with  an intimate warm up jam by the instructors band. For any budding bluegrass musicians out there this academy might be just what you need to take it to the Next level.