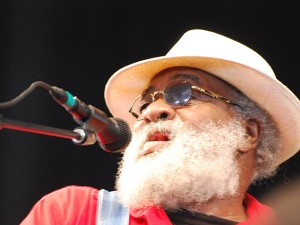 Tune in to the '50s R&B Show tonight at 7pm CT as host Neil Pellegrin pays homage to a largely unsung talent and intriguing personality in New Orleans R&B history: "Grandpa" Elliott Small, who passed away March 8 at age 77.

Thanks to Grandpa Elliott's prominent inclusion in 'Playing For Change' in 2009, he garnered a worldwide following and massive online fanbase over the last 13 years. Most of those who were hip to Grandpa Elliott, the eyepatch-and-overalls-clad street musician with the attention-grabbingly soulful voice, were likely not at all aware of his earlier involvement in the New Orleans record biz. Small waxed several tracks in the late '60s and early '70s under the direction of Wardell Quezergue at a time when Jean Knight's 'Mr. Big Stuff' and King Floyd's 'Groove Me' -- both Quezergue arrangements -- were at top spots on the national R&B chart.

In addition to his own recordings on A.B.S., New Sound, Bang and Malaco labels, Small also composed for other soul artists like Hank Sample, Chuck Simmons and Denise LaSalle. In one of the most bizarre episodes in New Orleans music, a psychedelic rock group called Satan's Roses aka Satan's Deciples [sic] used 'I'm A Devil,' a tune written and originally recorded by Small, as the theme for their (pseudo?) satanic stage act in the late '60s. (Pending further research, the group may have included Freddy Fender and/or Jo-El Sonnier.)

I had the chance to chat with Elliott about seven years ago. I recorded our conversation and I'll be airing it for the first time on this week's program.

UPDATE: Click here to hear it on the 2-week archive now.