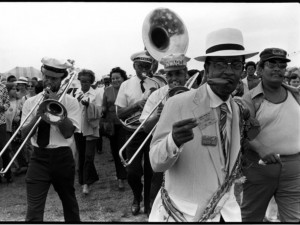 Danny Barker was one of the most important New Orleans musicians in the 20th century.  In addition to being a banjoist and guitarist, songwriter, bandleader, sideman, and legendary raconteur, he was a music educator who trained a new generation of young musicians who went on to carry the torch of New Orleans jazz for decades. He was a major figure at WWOZ in the station's early years, and every year around his January 13 birthday WWOZ celebrates him, his music, and his legacy. While this year's Danny Barker Banjo & Guitar Festival has been postponed until March, we're still holding our on-air festivities thanks to WWOZ's great Traditional Jazz show hosts:

On Monday, January 10, Dan Meyer will be sharing rare snippets from Danny himself, from the collection of the New Orleans Jazz & Heritage Foundation Archive.

On Tuesday, January 11, Leslie Cooper will be telling stories and playing the music of Blue Lu Barker, Danny's wife and musical partner, including a rare 1989 Jazz Fest set.

On Wednesday, January 12, "DJ Giant" Gerald French will be sharing his own recollections of Danny Barker and playing the music of Danny and his proteges.

On Thursday, January 13, Danny's actual birthday, Sally Young will be airing more great clips of Danny at WWOZ over the station's early years, as well as playing an ultra-rare 1970 performance recording of Danny at the Memphis Blues & Jazz Festival.  Danny himself brought this recording to WWOZ to broadcast, decades ago.

On Friday, January 14, the Minister of Swing will present highlights from Danny Barker's New York years, including recordings Danny made with Cab Calloway and others.

On Saturday, January 15, Big Pete will bring a big finale to a week of celebration!

Listen live at this link, or catch the programs after-the-fact on our 2-week archive.