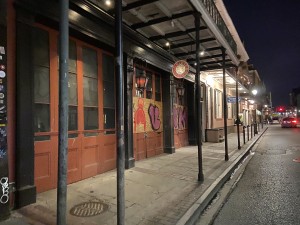 "Growing up in the French Quarter, the Toulouse Theatre was ever present. I can remember back when James Booker performed there, when it was a movie theater, when One Mo Time ran there and most recently as One Eye Jacks. It feels good to breathe new life into such a rare and important space," said Ben Jaffe. "I look forward to celebrating all that is special about this magical city."

Originally, the Toulouse served a variety of artistic purposes including a film house, cabaret theatre, a showcase of Vernel Bagneris’s vaudeville revue One Mo Time and a weekly residency by flamboyant piano genius James Booker. In 1999, after many iterations of the Toulouse, The Shim Sham club opened, replacing the original name and installing a burlesque and rock club attracting locals and visitors alike. In 2002, Rio Hackford, Ryan Hesseling and Cory Allen took over the location and opened One Eyed Jacks, which would become the most important rock venue in New Orleans.

"We first met Ben and Jeanette through mutual friends. We bonded over our passion for music, our work with local arts non-profits and our commitment to protect key historical spaces in the city. Toulouse Theatre connects all of those interests," said Clayton Randle.

Toulouse Theatre, along with a host of revered talent and promotion partners including Winter Circle Productions, will plan a variety of shows which will make it a refuge for local, regional and national performing arts in the French Quarter. A special Halloween weekend preview features a selection of New Orleans artists, including Big Freedia with Boyfriend and HaSizzle (Fri., Oct. 29), The Iceman Special (Sat., Oct. 30) and Quintron and Miss Pussycat (Sun., Oct. 31).

Fans of One Eyed Jacks and The Shim Sham Club will still feel right at home in the space, where the signature vintage wallpaper has been retained. Regulars will immediately notice the expanded balcony area, mezzanine bar and lounge, and refreshed bathroom facilities.

Significant facility improvements also include enhancements to safety with the installation of a sprinkler system. In addition, there is a larger floor area as the U-shaped bar has been cleared for additional viewing space for a total capacity of 420 patrons.

An additional set of doors have also been opened onto Toulouse Street, which will make the space feel brighter and more inviting for afternoon cocktails. The Toulouse lobby bar will also maintain regular hours for the French Quarter community and will be accessible independent of ticketed events.

Further demonstrating a commitment to an authentically local hospitality experience, the Toulouse management staff is made up of entirely New Orleans natives. General Manager Ivy Mouledoux has worked in the New Orleans arts and entertainment industry since his return home in 2011, having most recently served as General Manager of the Orpheum Theater.

In addition, Entertainment Manager Paulina Trujillo spent nearly a decade in management at the Maple Leaf, and she recently completed a run of dates on the road in her role as tour manager for Cha Wa. Finally, Food & Beverage Manager Kenneth Cocke was recently the floor manager for multiple outlets at the Hotel Peter & Paul, and he draws upon additional experience in the local industry from his work at Compere Lapin and Commander's Palace.