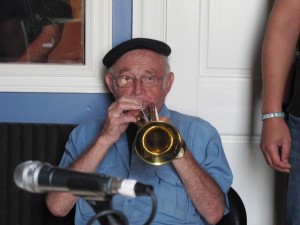 Trumpeter Jack Fine has died at the age of 93 after a storied life full of jazz.

Fine was born in Brooklyn in September 1928. At 17, he enlisted in the Air Force and served in British Guyana as a military police officer. He was able to travel extensively through the military. After his term of service ended, Fine returned to New York and began frequenting 52nd Street jazz clubs during the "Swing Street" heyday. It was there that he met Danny Barker. In the 1950s, he worked at the famous Commodore Music Shop in New York, and was a regular for the Monday night jam sessions at Jimmy Ryan's club. He went on to manage the Cinderella Club at 82 W. Third Street in Greenwich Village, where some of the biggest names in jazz were known to frequent, including Billie Holiday and Thelonious Monk. Later, he moved to Paris to work as a musician in the French jazz clubs.

The New York and Parisian jazz scenes proved enough for him for most of his life butn the 1990s, he arrived in New Orleans, the home of jazz, and stayed. He then began gigging at the Old Point Bar in Algiers. By the 2000s, he was performing regularly with some of the newer traditional jazz bands in the city, including the New Orleans Jazz Vipers and Smoking Time Jazz Club. In 2012, James Williams of the the New Orleans Swamp Donkeys Traditional Jass Band issued an open invitation for Jack to sit in with his band. The two had first met in the 1980s. It was a friendship that would prove invaluable at the end of Fine's life, as he moved out of his retirement community on the Westbank and into a small home adjacent to Williams' property. There, Williams was able to ensure Jack had what he needed, including personal resources, medication, and more.

WWOZ sends our best wishes to his family and friends at this difficult time. Funeral arrangements have not yet been announced.