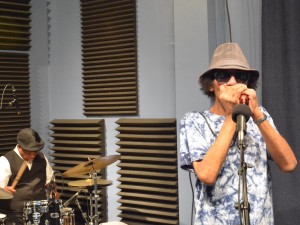 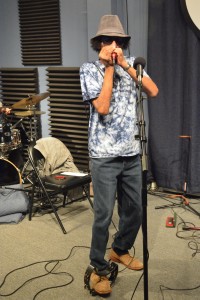 New Orleans musician J.D. Hill died of cancer at the age of 65 on August 8, 2021. Hill was a harmonica player and vocalist who loved to play and was known for his willingness to share the stage with anybody, as long as they had the groove.

Hill was born on November 8, 1955. He was raised in a family of musicians in Lockport, New York. His father taught him and his siblings to play harmonica. He began his first band there as a young man but would later join the Army. The service took him to Texas and, after being discharged, Hill moved to Austin to begin to gig on and around Sixth Street with the bandname he would maintain for the rest of his life-- J.D. & the Jammers. He first came to New Orleans in 1981 and quickly gained a good reputation for bending his unique style of traditional and electric blues harmonica and vocals into R&B, rock, New Orleans funk, boogie-woogie, and much more.

Hill was a bedrock of New Orleans blues, especially in the 1980s and early 1990s. He was well-known by other musicians and the best of the best would stop in to play with Hill whenever they could. He shared the stage with contemporaries like Dr. John, Deacon John, Allen Toussaint, Cyril Neville, Jessie Hill, Ernie K-Doe, Lee Dorsey, James Booker, Earl King, Buddy Guy, and Stevie Ray Vaughan. In the early 1990s, Hill earned his own reputation for letting people sit in with him, especially when he performed at Benny's Uptown. He was also an early live performer on WWOZ, hitting our airwaves multiple times in the first years of the station.

Hill's calm presence and commitment to good sound and good music made him a popular musician to play with. He played his heart out onstage every night and his love for the music never wavered. Around 2008, he started a regular open mic jam night at the St. Roch Tavern in the 7th Ward. There, everyone from Mac Rebennack to a young, new musician in town would sit in to jam. Hill could play with musicians he just met a few minutes ago and sound phenomenal. His friendship with both Deacon John Moore and Dr. John ran back for many years. In his healthy years, Mac would stop by Hill's gigs to jam. Hill kept a keyboard for him, one found on the side of the road after Hurricane Katrina by Hill's longtime partner, Polly Noble.

Beginning in 2015, Hill went through aggressive treatment for cancer in his throat. Doctors told him he would never sing again but his commitment to performing was strong and he came back to the stage. While his voice wasn't the same as before, he felt that as long as he was still on key, he would keep singing and make it work. He took on a regular gig at Bar Redux and continued to play other spots around town. For the last five years, fans could catch him at Bar Redux the final Thursday of each month.

In April 2021, despite having continued to be checked regularly after his first bout with cancer, Hill was diagnosed with an aggressive and terminal liver cancer. It came on quickly and his medical team was left with no treatment options. He died at home last Sunday.

WWOZ sends our best wishes to his family and friends at this difficult time. Funeral arrangements have not yet been announced.

Below, see his performance of 'Iko Iko' at WWOZ on October 16, 2016, featuring Joe Lastie on percussion.