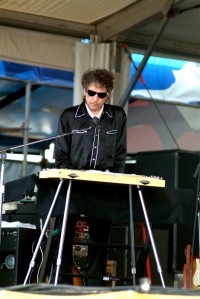 In early 1989, he recorded his album "Oh Mercy" in New Orleans with producer Daniel Lanois -- and he became a WWOZ fan. From his autobiography, Chronicles, Vol. 1:

"At the house on Audubon Place the radio was always on in the kitchen and always tuned to WWOZ, the great New Orleans station that plays mostly early rhythm and blues and rural South gospel music. My favorite DJ, hands down, was Brown Sugar, the female disc jockey. She was on in the midnight hours, played records by Wynonie Harris, Roy Brown, Ivory Joe Hunter, Little Walter, Lightnin' Hopkins, Chuck Willis, all the greats. She used to keep me company a lot when everyone else was sleeping. Brown Sugar, whoever she was, had a thick, slow, dreamy, oozing molsses voice--she sounded as big as a buffalo--she'd ramble on, take phone calls, give love advice and spin records. I wondered how old she could be. I wondered if she knew her voice had drawn me in, filled me with inner peace and serenity and would upend all my frustration. It was relaxing listening to her. I'd stare at the radio. Whatever she said, I could see every word as she said it. I could listen to her for hours. Wherever she was, I wished I could put all of myself in there.

"WWOZ was the kind of station I used to listen to late at night growing up, and it brought me back to the trials of my youth and touched the spirit of it. Back then when something was wrong the radio could lay hands on you and you'd be all right......

"New Orleans had the best radio stations in the world."