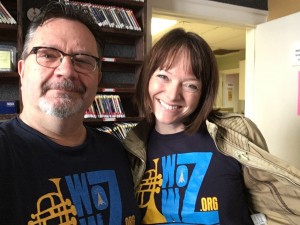 WWOZ Volunteers: What neighborhood of New Orleans are you from?

I am from Marrero, LA on the Westbank of New Orleans, and I currently live in Harvey, LA, just a few miles from where I grew up.

WWOZ Volunteers: How did you become acquainted with WWOZ?

I found WWOZ in the 90’s. I was playing with a local band “Red Hot & Blues” and we became fairly popular in the area, playing at local clubs and festivals. I heard a lot of the blues that we were playing live, and listened to ‘OZ to hear the different versions of the songs that we were covering at the time.

WWOZ Volunteers: Why were you motivated to volunteer at WWOZ?

After years of playing around town, I felt that I was still not “connected” to the New Orleans music community like I wanted to be. I figured that volunteering at ‘OZ would give me the opportunity to get more involved in the spirit of the New Orleans music scene, meeting more of the musicians of the city and learning more about the culture of our music.

WWOZ Volunteers: What have you been doing at the station, and how has that enhanced your appreciation of New Orleans Music and Culture?

I began volunteering at the station last August. I worked with Murf on the “Live Wire” links to the New Orleans musicians, finding information about each band’s social media sites like Facebook, Twitter, Instagram and their artist websites, attaching those links for reference on ‘OZ LiveWire listings page. I have also volunteered for the phone bank at the studio during fundraisers. Looking forward to working at the station again as soon as possible!

WWOZ Volunteers: Tell us about your profession and other interests.

I am very currently re-employed, after being unemployed since March. I owned a small hospitality consulting franchise that shut down in June, 2020. It’s all good, though. When one doors closes, another opens. Life has been good to me so far... wait, there’s a song in there somewhere ;)

I’ve played bass guitar since age 13, grew up on rock, but also play soul, blues, funk. NOLA has some of the funkiest players and a couple of my influences are George Porter Jr. (of course) and Jack Cruz of Walter Wolfman Washington and the Roadmasters.