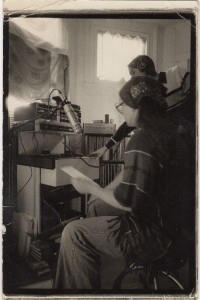 Hosted by:
Dean Ellis
A look back at one of OZ's first show hosts and founder of Tudo Bem

In honor of WWOZ's 40th anniversary, I will be presenting a special Tudo Bem today featuring one of the station's very first show hosts, Katrina Geenen, founder of Tudo Bem, the music of Brazil, which Suzanne Corley and I took over after Katrina--whose last show was on OZ's final day (August 27, 2005) before you-know-what hit (hint: it sounds alot like Ms. Geenen's first name)--left the city for Mississippi, where she remains to this day. I'll be playing a bunch of live performances from the New Orleans studio as well as from the Tenda da Raposa studios in Santa Teresa, Rio de Janeiro (where I sorta got my start with the station as apprentice, translator, and CIA [CaipirInhA] agent). Here in a photo from late December, 1980, is Katrina recording her very first show with Jerry Brock in the Brock Brothers living room. It was taken by Joe Smith (brother of the legendary photographer Michael P. Smith), who introduced Katrina to the founding brothers when she was tending bar at Tipitina's, downstairs from where OZ's first studio would eventually be located. Joe Smith told the Brocks that Katrina was a devotee and collector of Brazilian music, and so they invited her to bring in some records and do and show, and the rest is história. The very first WWOZ shows were prerecorded at the Brocks' apartment in the Treme before there was a studio, then taken to a small cement block building beneath a transmitter tower on the banks of the Mississippi, where the Brocks ran 10 hours worth of prerecorded shows, the minimal amount of time required to keep OZ officially on the air. Tune in from 2-4 PM CST on 90.7 FM in New Orleans or on the "rede mundial" at www.wwoz.org.