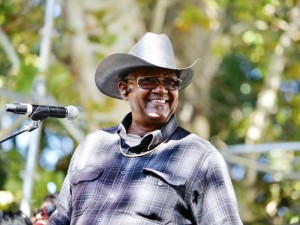 Memphis-based gospel blues guitarist and vocalist Reverend John Wilkins died this morning at the age of 76. He was the son of the influential prewar blues musician Reverend Robert Wilkins. As an adult, he served as the pastor for the Hunter’s Chapel Church in Como, Mississippi.

In a statement released on his official Facebook page, family shared that "He loved God and his family and his congregation whether in church or on tour, and most of all he loved playing music with his daughters to the world. His music carries his love and spirit forward to us all. May he rest in love and power and peace."

Wilkins was born in Memphis in 1943 and began playing guitar alongside his famous father in church at five years old. He said that his ability to play was a "gift from God" and that he liked to allow "every string to speak for itself," in his playing. By nine, Wilkins began playing with gospel groups around Memphis. As an older teen, he added blues to his repertoire and played at area jukes on the weekend nights while continuing to play gospel on Sundays. He also sat in on sessions at Stax.

Like his father before him, Wilkins experienced a moment in his life when he felt he needed to choose blues or gospel, and could not go on playing both. He, of course, chose gospel (but retained elements of blues) and went on to become pastor at Hunter's Chapel, starting in 1985.

Wilkins battled COVID-19 earlier this year and was released from a lengthy hospitalization in early September. His hospital release occurred quite close to the release of his new album on Goner Records,  Trouble, which was recorded before his illness.

WWOZ sends its best wishes to his family and friends. Below, a song from his 2018 appearance at the Crescent City Blues & BBQ Festival.