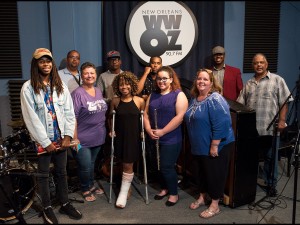 Celebration of the conclusion of the 26th Anniversary of the Louis "Satchmo" Armstrong Summer Jazz Camp will go on despite restrictions due to the ongoing coronavirus pandemic. Like this year’s summer jazz camp, instructors and students will come together virtually to hold the traditional culminating concert that will take place on Saturday, August 8 at 7pm.

The camp’s founder and executive director, Jackie Harris, announced that there would be a full agenda of musical performances by camp students and instructors during the one and half hour virtual event. “It’s definitely going to be different, but in keeping with camp tradition, we want to allow our students and instructors to perform, so we are going to have a culminating concert allowing those who want to attend to watch virtually,” Harris explains. The concert can be accessed on YouTube on August 8 at 7pm.

The Culminating Concert will be hosted by Lebron Joseph and will include messages by Harris and Sybil Morial, president of the New Orleans Arts & Cultural Host Committee, acclaimed musician, composer, bandleader, and New Orleans native, Wynton Marsalis, who served as an instructor this year, and a special presentation by Grammy nominee, Stefon Harris, the camp’s 2020 Artist-In-Residence. The culminating program will also consist of pre-taped performances by students and faculty who participated this year and will conclude with a special finale performance of “When You’re Smiling.”

This year’s Louis Armstrong Summer Jazz Camp was all virtual and ran from June 22 – July 3. Harris says 55 students from around the U.S. and as far away as London and British Columbia participated. Instead of physically being in a classroom, instructors used Zoom and a musical app called Manoké, which is a library of digital sheet music, for student instruction.

The Louis “Satchmo” Armstrong Summer Jazz Camp is a pre-eminent jazz education program developing the next generation of Jazz artists and preserving this great American art form. Students range between the ages of 10 to 21-years-old and must be actively involved in a music education program through school or private instructions or have studied music and primary instrument for a minimum of two years or demonstrate the ability to perform. To participate in the camp, students must complete and pass an on-site audition.