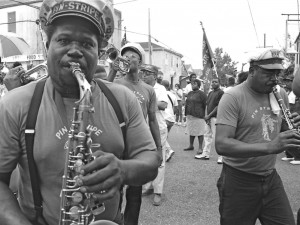 Miller was born Uptown on December 15, 1949. As a student at James Durham Junior High School, he played trumpet in the school band before switching to saxophone. He later attended Booker T. Washington High School where he performed in the school bands before starting his career as a professional musician. He started as a member of Doc Paulin's Brass Band. In 1978. he branched out to his own group-- the Pinstripe Brass Band. The band would go on to be influential in the New Orleans brass band tradition and performed locally, nationally, and internationally, always proud ot share the culture of New Orleans. The group also paraded or performed, in one incarnation or another, at nearly every Jazz Fest from 1981 through 2015, and inspired a spinoff group, the Young Pinstripe Brass Band.

Passing the traditions on to the next generation was important to Miller. His son, Brice, has now taken up that mantle, and leads the Mahogany Brass Band, performs as Dr. Brice Miller, and leads Ecirb Müller's Twisted Dixie.

A private service was held on Saturday, April 18. A jazz funeral and cultural sendoff is in the works for whenever it is safe to do so. WWOZ will share those public arrangements at that time.

In the video below, Dr. Brice Miller talks about going to the Fairgrounds to parade with his dad's band as a young boy.