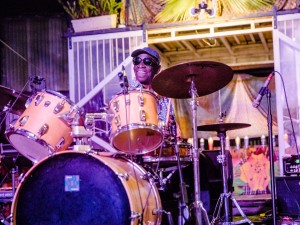 On Thursday April 30, human music suffered a loss that was felt around the world. Tony Allen, the source of afrobeat rhythm, passed away at his home in Paris.

Tony grew up in Lagos, Nigeria, and spent his years as a young man immersed in a thriving live music scene. Having internalized local styles like apala, juju, mambo, were, sakara, agbadza, highlife, and many others, Tony developed a passion for American jazz as well. His first musical hero from the west was Art Blakey. By the time he met Fela Kuti in the mid-60’s, Tony had used Blakey’s influence to develop a mastery of his hi-hat foot that other drummers in Lagos just didn’t have. From the first audition, Fela picked him up immediately for his weekly live jazz radio show. But Tony needed to take his innovation further, and Fela did too. After spending most of 1969 in Los Angeles, Fela Kuti, Tony Allen, and the Afrika ’70 came back to Lagos with something brand new: afrobeat.

For the next eight years, Tony was Afrika ’70’s bandleader, and the rhythmic engine for over sixty of Fela’s greatest afrobeat compositions. The Afrika '70 albums from this era launched some of the most innovative and well-known songs to have ever come from Africa, securing Tony a position as one of the most influential drummers ever recorded. After the 1978 Berlin Jazz Festival, Tony left Fela’s band. They remained friends for the rest of Fela's life, and Tony embarked on his own career. For over forty more years, he never tired. During the six years that I knew Tony Allen as a mentor and a friend, I was always amazed by his lifestyle of nonstop touring, recording, collaboration, and continued innovation.

Tony Allen's teachings were consistent throughout his song lyrics, the way he played the drums, and the way he lived. His path to wisdom was one of togetherness, kindness, gentleness, coolness, equality, progress, and peace. He never “beat” or “hit” the drums. He touched them. When Tony was playing, the drums never cried or shouted. They sang. Without forcing, he was able to create profound energy with his instrument, keeping the band on fire as long as the venue would allow. Tony liked to create new beats for every musical piece he encountered, rarely reusing a groove, and never using the "2 and 4” backbeat we hear in so much of our music. The asymmetry of his patterns creates a push and pull that keeps the music moving, often for over 15 minutes in a single song, without ever feeling stale.

Tony came to New Orleans twice in 2018, to play the Music Box Village with my afrobeat band Kumasi, the Preservation Hall Jazz Band, Bill Summers, Damas "Fanfan" Louis, and others. After an improvised set with bounce vocalist Ha Sizzle, Tony said he felt like he was “tripping in the ocean.” Tony and I would often spend all night drinking, talking, and laughing. I learned as much about life during those nights as I did about the drums during our lessons. Still, I would always give up first, sometimes after 5am, and he'd laugh at me while I stumbled off to sleep. Tony Allen knew something that exists at the heart of New Orleans culture: every day can be an opportunity to celebrate. We don’t have to wait for a "special" day, because every day is special. Life is beautiful.