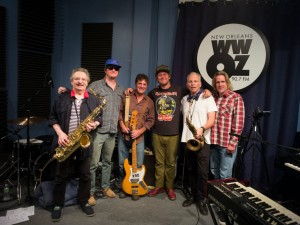 Saxophonist Jerry Jumonville passed away December 7, 2019, at Passages Hospice in New Orleans. He was 78.

He was born December 5, 1941 and grew up in Carrollton. In high school, he formed The Matadors. Jumonville moved from New Orleans to Los Angeles in the late 1960s on the advice of Mac Rebennack. He was a highly sought after musician throughout the 1970s, in particular. Jumonville toured with or had work featured on recordings by Rod Stewart, Bette Midler, the Doobie Brothers, Bonnie Raitt, Van Morrison, Ray Charles, James Brown, and many more. He also appeared on the sitcoms Happy Days and Laverne & Shirley.

Jumonville forged a successful music career through performance, production, writing, and arranging. In 1991, he returned to New Orleans and moved into the same home he'd grown up in. Throughout the 1990s and early 2000s, he performed with Rockin' Dopsie, Irma Thomas, Allen Toussaint, The Radiators, and more. He also formed his own band, Jump City.

In 1986, Jumonville released his first album under his own name: Jump City. He followed this up in 2008 with a sophomore effort, You Are My Dream.

WWOZ sends condolences and best wishes to Jerry's family and to his many friends, both local and far afield.

Below, see his performance with Eric Lindell at WWOZ in 2016: