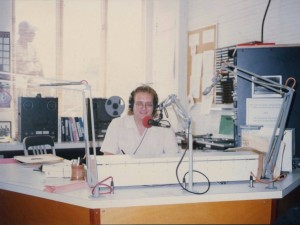 We hope you enjoyed the special programming on Wednesday for our 39th birthday! We welcomed a number of special guests back into the studio to share stories about WWOZ's past, shared very rare performances recorded or broadcast live by WWOZ, and much more. There were so many good stories flying that we didn't get to everything that had been planned. So, we've got a bit more for you!

Monday morning Trad Jazz host Dan Meyer has been with WWOZ almost since its inception in 1980. Tune in to his show 9-11am on Monday, December 9 to hear more from the last 39 years of WWOZ, including Von Turk, Gentilly Mary, Melinda Pendleton, and even the infamous 1984 Krewe of Clones parade broadcast.

And that afternoon from 4-7pm, longtime show host Maryse Dejean will be sharing even more on Jazz From The French Market, including flashbacks with Wynton Marsalis, Michael Kline, Katrina Geenen, Jeff Duperon, Samirah Evans, Mark Hawkins, and many others.