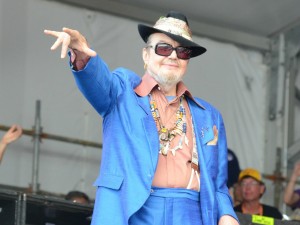 Mac Rebennack was born November 20, 1941 (formerly November 21, 1940). This November, the first since his death in June, his memory and music are living on very strongly in New Orleans.

On Wednesday, November 20 starting at 6p, there will be a Dr. John Second Line Parade with James Andrews & the Crescent City All-Stars. It begins at Congo Square (701 N. Rampart). The parade will honor and celebrate Mac's life and birthday.

Tipitina's is hosting a Dr. John Tribute on Wednesday, November 27. This is also the day before Thanksgiving. Doors are at 7p and the show starts at 8p. The musical director for the night is George Porter, Jr., and he's assembled an all-star cast of musicians to pay tribute to the late Dr. John. Ivan Neville, Jon Cleary, Deacon John, Walter Wolfman Washington, Big Chief Monk Boudreaux, Anders Osborne, David Torkanowsky, James Andrews, Johnny Sansone, Stanton Moore, Tom McDermott, and Josh Paxton will all hit the stage. A portion of the proceeds from the evening will go to the New Orleans Musicians' Clinic, an organization that Dr. John was a major supporter of. Full info can be found at tipitinas.com.