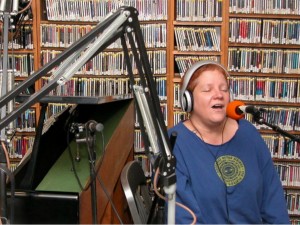 Leigh "Little Queenie" Harris, lead singer of Lil Queenie & the Percolators, passed away on September 21, 2019, at the age of 65, after a battle with cancer. She was in hospice care in North Carolina. For decades, Harris was revered by her peers and fans, alike, for her vocal range and commanding stage presence.

Harris was raised in Old Metairie and started Lil Queenie & the Percolators in the late 1970s with keyboardist John Magnie. The group was boosted by Harris's commanding stage presence and memorable appearance. She often dyed her hair red and cut it with fingernail clippers. The Percolators performed at Tipitina's, the Dream Palace, Jimmy's, and more. The group's sound mixed soul, funk, jazz, and New Orleans R&B. Their best-known song, 'My Darlin' New Orleans,' closed out the first episdoe of HBO's Treme on April 11, 2010-- 30 years after it was released.

The Percolators disbanded in 1982. Harris went on to work with guitarists Peter Holsapple and Jimmy Robinson in the Mixed Knots, a bluegrass-style band, Roy G Biv with two drummers and two keyboardists, and unconventional vocal groups the Ofay Soul Choir and Litlte Queenie's Wahini Dakinis. In 1999, she released House of Secrets, an album that showcased her remarkable vocal skills. Earlier this year, she released Purple Heart, which features a dozen unreleased recordings she made between 2003 and 2005.

Throughout her career, she shared the stage and recorded with dozens of local and national artists, including B.B. King, The Meters, James Booker, Dr. John, Professor Longhair, Irma Thomas, Allen Toussaint, Elvis Costello, Harry Connick, Jr., the Neville Brothers, and many more.

In the spring of 2016, doctors diagnosed her with Stage IV breast cancer that had metastasized to her bones, brain, lymph system, and liver. From then on, she waged a multi-front battle against the disease. New Orleans musicians organized a "Gawd Save the Queen" benefit for her at Snug Harbor that year, and another at Chickie Wah Wah in February 2017. That same month, she was inducted into the Louisiana Music Hall of Fame. On July 25, 2019, the New Orleans City Council issued a proclamation in acknowledgment of her musical contributions to the city.

Harris will be remembered by many as a connection-former. She loved to make introductions and welcome promising new talent to the stage with her. She will be greatly missed. The WWOZ family sends its best wishes to her family and friends, and our appreciation for the years of music she gave us.