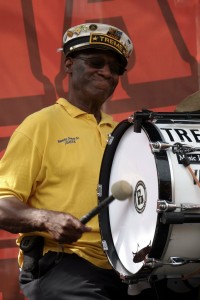 This week on Takin' It To The Streets, Action Jackson talks with Benny Jones, Sr., leader and owner of Treme Brass Band. They discuss his childhood in the 6th Ward, including the drumming tradition in his family and neighborhood from the 1950s onward. He remembers attending Joseph A. Craig Elementary and seeing the brass bands going down the streets on their way to the Caldonia Inn in the early and mid-1950s.

Jones also mentions his start with the Dirty Dozen Kazoo Band, which later evolved into the Dirty Dozen Brass Band, and stepping out with them for Mardi Gras alongside Uncle Lionel, who dressed with the Baby Dolls.

Mr. Benny also discusses playing with Olympia Brass Band and the Storyville Stompers, popular style of drums in the streets through the years, his Tuesday night gig at d.b.a., and much more.

Catch Treme Brass Band at d.b.a. every Tuesday from 9pm-12am or 10pm-1am, depending on the week!

Hear the interview below:

Update Required To play the media you will need to either update your browser to a recent version or update your Flash plugin.
Topic tags:
Takin' It to the Streets interviews
Related program(s):
Takin' It To The Streets
Related content: