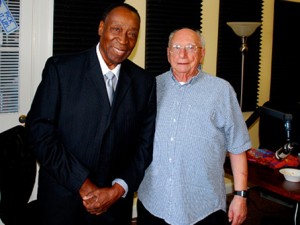 Dave Bartholomew with legendary engineer Cosimo Matassa at WWOZ in 2008. 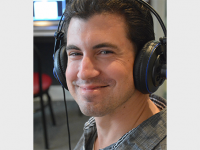 The great New Orleans musician, composer, arranger, bandleader, and producer Dave Bartholomew died on June 23, 2019, at the age of 100. In the following days, WWOZ show host Neil Pellegrin began an unprecedented and wide-ranging seven-part retrospective of his career, eventually stretching over 21 hours, in seven weekly installments.

For those who missed some or all of these groundbreaking shows, WWOZ has made all seven parts available on-demand for the next 2 weeks. Hear the shows through Friday, September 13 on the players at the bottom of this page!

Part 2: Starts with a couple of '50 Imperial recordings before detouring to explore some of Dave's freelance work for other labels. Then it's back to Imperial for '52/53!

Part 3: Explores 1953 through 1955 with many classic and obscure recordings from Dave's arsenal.  Some of the artists who recorded with Dave during this period are Fats Domino, Smiley Lewis, Pee Wee Crayton, Bobby Mitchell, the Spiders and the Hawks, just to name a few.

Part 4: From late 1955 through the spring of 1957 with some of Dave's most famed recordings as a producer, writer, arranger, band leader and feature artist. During this period and under Dave's direction, Fats Domino enjoyed some of his biggest hits; New Orleans R&B titans Roy Brown and Sugar Boy Crawford both signed with Imperial Records; and out-of-town talents Johnny Fuller, the Dukes, and Lester Williams made stops in New Orleans in hopes of capitalizing on some of Dave's studio magic.

Part 5: Showcases a particularly heavy helping of Fats Domino, whose tour schedule and record dates kept him busier than ever in '57 and '58 as he rode the crest of his long-running string of Bartholomew-produced R&B and Pop hits. The music of singer-songwriters Chris Kenner and Bobby Charles will be making its first emergence on the Bartholomew tribute in this installment. And among the non-local surprises will be a highly revered Atlanta blues shouter, a hopelessly obscure female vocal group and a one-off rockabilly howler.

Part 7: The finale will explore almost the entirety of the '60s, kicking off in early 1962 with some of the last Imperial recordings produced by Dave.  Also included will be several tracks from the vaults of ABC-Paramount, GNP Crescendo and Mercury labels before moving into material from Dave's own imprints, Trumpet and Broadmoor Records.