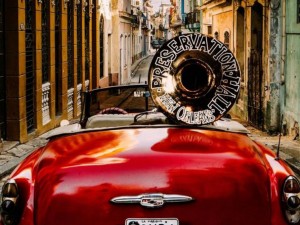 Still from 'A Tuba to Cuba'

This year's festival will show 220 films that represent a wealth of perspectives, culled from a record number of nearly 6000 film and screenplay submissions (an increase of over 25% from 2017). Entries came from 120 different countries and selected films represent 42 different nationalities. Louisiana-made films represent 27% of the lineup.

"Audiences are hungry for trailblazing films, dynamic perspectives and broader representation on-screen and behind the camera. We hope that #NOFF2018 will be site of discovery–– for stories less often celebrated, for creative voices that aren’t prioritized for mainstream Hollywood, and for audiences who are drawn to films that reflect and shape our culture today," said New Orleans Film Society’s Executive Director, Fallon Young.

The festival has also announced the film ​A Tuba to Cuba​ as its ​Closing Night​ selection, to screen Thursday, October 25, at the Contemporary Arts Center​, with a special performance to follow from the ​Preservation Hall Jazz Band​ as part of the ​Closing Night Party​. The documentary, which follows the band as they retrace their musical roots to the shores of Cuba, underscores the festival’s programmatic focus on films from and about the ​Caribbean​ and the Caribbean diaspora, particularly those that speak to the historical and cultural ties between New Orleans and the Caribbean.

This year the New Orleans Film Festival campus expands to include a larger campus in the New Orleans Central Business District, centered around ​a new festival HUB at the Contemporary Arts Center (CAC)​, which boasts a 1800-seat and 300-seat screening room; ​Cinema Reset virtual reality program​ sponsored by Cox Communications with VR and new media programming by NOFF, with support from Restore the Mississippi River Delta Coalition, Downtown Development District and Samsung; a music video lounge; and the festival’s main box office.

Two blocks away from the HUB at the CAC, ​The Advocate​ will host a 180 seat screening room and the festival’s VIP lounge for All-Access Passholders. Select ​festival screenings​ will also be held ​at the Broad Theater, Orpheum Theater and Prytania Theater.

Also of note is the Louisiana Features Competition. See details of these selections below.

Bending Lines: The Sculpture of Robert Wiggs​ | dir. Allison Bohl DeHart, Peter DeHart | USA Obsessed with the repeating geometry of nature, a sculptor works in the space between art and science.

Buckjumping |​ dir. Lily Keber | USA
WORLD PREMIERE​. ​Buckjumping takes the pulse of present-day New Orleans by turning to its dancers, the men and women who embody the rhythm of the city and prove it on the streets every chance they get.

The True Don Quixote​ | dir. Chris Poché | USA
WORLD PREMIERE​. ​Danny Kehoe lives an ordinary life that leaves him bored nearly to death. His only escape is in his collection of books and comics, all recounting, with great inaccuracy, the romantic tales of the chivalrous Knights Errant. When those books are taken away, he goes mad. In his desperation, he re-christens himself as the last and greatest knight of all, Don Quixote.

This Little Light​ | dir. Ada McMahon, Wendi Moore-O'Neal | USA
When Black feminist freedom singer Wendi Moore-O’Neal married her now wife, Mandisa, she was fired from her job as a community organizer. This is a self-determined portrait about the Black Southern Freedom movement.

This Taco Truck Kills Fascists​ | dir. Rodrigo Dorfman | USA
WORLD PREMIERE​. ​Jose Torres-Tama is on a mission: to create a revolutionary Taco Truck Theatre with a simple message: “No guacamole for immigrant haters”.

Tomorrow Never Knows​ | dir. Adam Sekuler | USA
The uncomfortable reality of death is faced by Shar and Cynthia who, upon Shar’s diagnosis with early-onset Alzheimer’s, make a brave and difficult decision​.