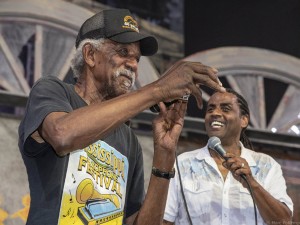 Leslie Johnson, better known as Lazy Lester, passed away Wednesday, August 22 at the age of 85 after a battle with stomach cancer. He was a wonderfully gifted blues musician and performer who is widely known as a pioneer of the swamp-blues genre.

Lazy Lester was born June 20, 1933 in Torras, Louisiana. He lived in Pontiac Michigan, from 1975 until 2005, when he moved to his final home in Paradise, California. He had many highlights in his career that stretched back to the 1950s. His best known recordings include 'I'm A Lover, Not A Fighter,' 'Sugar Coated Love,' and 'I Hear You Knockin',' all of which were released on Nashville's famed Excello Records. He also performed with a young Buddy Guy, Lightnin' Hopkins, Slim Harpo, Carol Fran, and many more. His songs were covered by The Kinks, Dwight Yoakam, Dave Edmunds, and The Fabulous Thunderbirds.

Lazy Lester was a session player in J.D. Miller's studio in Crowley in the late 1950s, where he played behind many important Louisiana musicians including Clifton Chenier, Clarence Garlow, Lightin' Slim, Silas Hogan, Lonesome Sundown, and Tabby Thomas. Starting in 1987, he was a regular at the New Orleans Jazz & Heritage Festival, and also a frequent performer at the Baton Rouge Blues Festival and the Ponderosa Stomp.

Lazy Lester was inducted into the Louisiana Blues Hall of Fame in 2008 and the Blues Foundation's Hall of Fame in 2012. In 2004, he performed for Martin Scorcese's famous 'Year of the Blues' concert at Radio City Music Hall in New York and subsequently became one of the featured artists on Lightning In A Bottle.

Lazy Lester performed nearly up until his death, including an appearance at the New Orleans Jazz & Heritage Festival with friend Kenny Neal this year. Below, see our video of his performance of 'They Call Me Lazy' with Lil Buck Sinegal at the Blue Moon Saloon in Lafayette, LA on August 15, 2014, and video from the Excello Records Reunion set at the Crescent City Blues & BBQ Fest on October 17, 2015.

Funeral arrangements have not yet been announced.