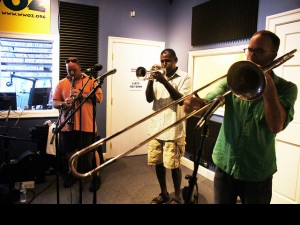 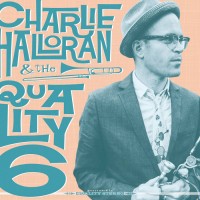 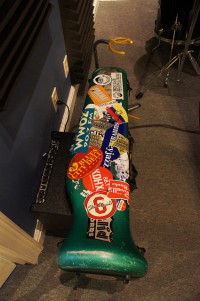 Traditional jazz is alive and well in today's New Orleans, and Charlie Halloran & the Quality 6 are some of the top purveyors. Released in November, their self-titled album is deeply steeped in tradition and that special New Orleans sound. The group is led by trombonist Charlie Halloran, a man about town-- in addition to his own project, Halloran also plays trombone with Jimbo Mathus's Squirrel Nut Zippers, Meschiya Lake & the Little Big Horns, the Palmetto Bug Stompers, Panorama Jazz band, and the Shotgun Jazz Band. To keep his schedule a little fuller, he also has been known to stand up with Tuba Skinny and The Preservation Hall All-Stars. OffBeat ran an article on Halloran's busy schedule in the days leading up to this year's French Quarter Fest, where he appeared nine different times! This, clearly, is a man who loves to perform.

Joining him for this release is Charlie Fardella on trumpet, Tim Laughlin on clarinet, Steve Pistorius on piano, Tom Saunders on bass, Walter Harris on drums, and Jimbo Mathus on vocals. Halloran's trombone happily leads the way on most of the tracks. He flies especially high on 'If We Never Meet Again.' Laughlin sounds fantastic on 'Memphis Blues' and Pistorius shines on the ragtime sounds of 'Weather Bird.' 'Dreaming the Hours Away' inspires one to hop up and dance. A cover of the Squirrel Nut Zippers' 'St. Louis Cemetery Blues' sounds nice and fine, with guest vocals from Mathus on this track and 'Beautiful Dreamer.'

Charlie Halloran & the Quality 6 is available to purchase on MP3 and CD at Bandcamp, CDBaby, and the Louisiana Music Factory. You can also preview all eleven of the tracks at Bandcamp and CDBaby.

Halloran has many local shows coming up. You can catch him onstage with all of these fine musicians before the end of the month: