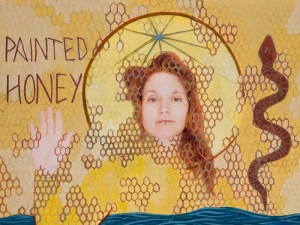 Painted Honey formed in 2014 out of New Orleans' 9th Ward. They recently released their first album, Turquoise Roads. Creating a visceral landscape of sound, writer and visionary MaeDea weaves the heartbeats of two influential cities. New Orleans' street harmonies enter twined with psychedelic folk of Tucson's desert blues to create a genre she describes as "witch pop." Fans of artists like José González, Mirah, Marissa Nadler, and Alessi's Ark will find a new group to add to their playlists in this uniquely southern American album that was recorded in New Orleans' St. Roch neighborhood.

The musical marriage between humid New Orleans and the arid atmosphere of Tucson is an unlikely one, but MaeDea's sound with Painted Honey is exactly that. Psychedelic desert folk created by some recognizable names in more "traditional" New Orleans music, including collaborators from The Smoking Time Jazz Club, Tuba Skinny, and the G-String Orchestra is unexpected but works out beautifully.

The female vocalists shine on this album. MaeDea sounds wonderful alone, and is joined on many tracks by other supremely talented voices, including Sarah Peterson of Smoking Time. Cello and violin are deftly interwoven throughout, adding more beautiful layers. The tactic is executed best on the opening track "Asterion." "Turquoise Roads and "Jaguar and the Journey" showcase the psychedelic desert folk sounds very well, and the cello sounds from Brian Hullfish add to the depth of the songs. "Cradle of the Hush" brings a spooky vibe, and "Sun Temple" and "Clay Halos" turn attention to a spiritual side of life.

Painted Honey is heavily influenced by nature and the natural order of things-- the languages of rivers, wind, stones and stars. It may sound other-worldly to use such descriptors, but the sound comes out just this way.

Turquoise Roads is available for streaming and purchase at Bandcamp. Check our Livewire Music Calendar for any upcoming local performances.