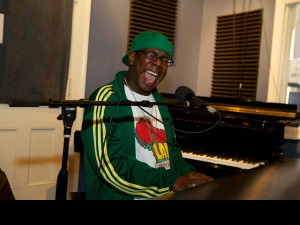 New Orleans soul singer Nigel Hall released his latest album, "Ladies and Gentlemen... Nigel Hall" earlier this month on Feel Music Group/Round Hill Music. Hall displays incredible range throughout the album, which is full of Hall's signature smooth vocals and keyboard skills. He's clearly influenced by both old school and modern R&B and soul while also adept at mixing in more modern sounds-- just a touch of hiphop here and a dollop of pop or jazz there.

'Gimme A Sign,' opens the album on a strong note and, unexpectedly, features an electric sitar. The song's catchy tempo brings Pharrell's huge 2013 hit 'Happy' to mind. 'Too Sweet' is a song for fans of present day male pop vocalists, as is the album's final song, the seemingly effortless but beautiful 'Call On Me.'

Hall tackles four covers on this ten-track album with agility, respect, and fantastic end results, skillfully paying homage to those who have come before. His versions of The Isley Brothers' 'Lay Away' (where he's joined by ?uestlove and Ivan Neville) and Ramp's 'Try, Try, Try' are like taking a time machine straight back to the 1970s without simply creating carbon copies of the originals.

Hall's own 'Never Gonna Let You Go' has an undeniably early Motown-influenced sound while his cover of Latimore's 'Let's Straighten It Out' brings post-Jackson 5-era Berry Gordy to mind. He adds a funk-influence to Ann Peebles' 'I Can't Stand the Rain' with great success, as well. Hall continues his respects to female vocalists when he's joined by Alecia Chakour for 'I Just Want to Love You.' Chakour adds traces of Jill Scott to this already fabulous album.

"Ladies and Gentlemen..." is available on vinyl, CD and MP3 from iTunes and Amazon. His next local performance will be on Wednesday, December 2 at Tipitina's.