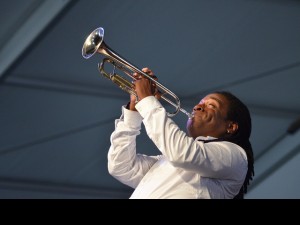 Steve Lands of The Session [Photo by Hunter King] 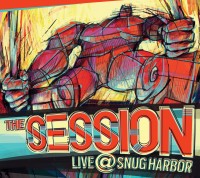 The Session, a New Orleans-based contemporary jazz quintet, released their sophomore album, Live from Snug Harbor, earlier this year. The group decided that the best representation of their sound would be captured by recording live and, based on this album, it seems they were quite right. The sounds from this talented quintet, captured in January 2014 during a performance at one of New Orleans' best jazz venues, run the gamut from the deeply emotional and stirring ('Field Holler,' 'Girl In My Heart') to fun and playful ('The Price Is Right' theme song, 'Steve's Samba'). Regardless of the song, the musicianship shines throughout the entire recording.

In a group full of talented musicians, pianist Andrew McGowan stands out, particularly on the opening track 'Mr. Olympia,' 'Hello Good Evening,' and the fast-paced 'Napoleon & Magazine.' Trumpeter Steve Lands shines on 'Bright or Night' and 'Steve's Samba.' Drummer Darrian Douglas shows off his well-developed skills on 'From Africa to Congo Square' and saxophonist James Partridge sounds fantastic on 'Peace Is Broken/Time Is Running Out' and 'Shadow Cats Return.' Bassist Jasen Weaver brings the beat to the forefront with impressive work on 'Bass Magic.'

Though the group is technically in the realm of contemporary jazz, each of its members has a deep appreciation for tradition. They've studied under and played with some of New Orleans most legendary elder performers, including Ellis Marsalis, Germaine Bazzle, and the Preservation Hall Jazz Band. The relatively youthful group has deep New Orleans roots-- McGowan and Weaver studied at the New Orleans Center for Creative Arts, while Darrian Douglas holds drum chair in Ellis Marsalis's quartet. Lands also performs with the Uptown Jazz Orchestra, led by Delfeayo Marsalis.

Live from Snug Harbor is available on CD and MP3 from CDBaby, Bandcamp, Amazon, and iTunes. They recently completed a European tour. Find out their upcoming New Orleans dates by keeping an eye (or ear) on the WWOZ Livewire Music Calendar.