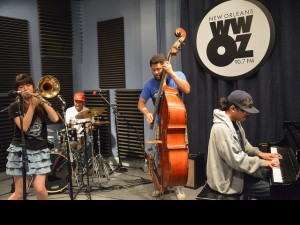 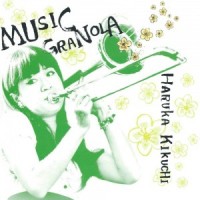 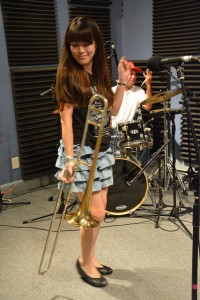 Trombonist Haruka Kikuchi and her band landed in the WWOZ studios last Friday morning for an electrifying set on Keith Hill's Traditional jazz show and had the whole staff dancing. Kikuchi shared three songs from her brand new CD, Music Granola, with the WWOZ audience.

Kikuchi, a native of Chiba, Japan, has clearly been a student of the traditional New Orleans sound for years, taking close notes from Kid Ory. She studied at Tokyo University of the Arts till 2010, when she graduated with a degree in Music Science. Her passion brought her halfway around the world two years ago, and she now lives in the Crescent City, performing with the likes of Kermit Ruffins, The Shotgun Jazz Band, and The Swamp Donkeys.

Musically, Kikuchi sounds like she may as well have been born and raised in Treme. Her new album, Music Granola, is full of easily recognizable New Orleans standards like "Tin Roof Blues," "Joe Avery," and "Tiger Rag." Kikuchi's trombone flies as she skillfully leads a band full of experienced musicians on each song. In addition to Ruffins, Shannon Powell, Barry Stephenson, Tom Fischer, Larry Scala, Walter Harris, and Yoshitaka 'Z2' Tsuji join her for the recording. Kikuchi and her band celebrated with a CD release party at Kermit's Mother-in-Law Lounge in Treme on Sunday, November 8.

Though Kikuchi has only lived in New Orleans since the beginning of 2014, she has quickly ingratiated herself into the close-knit community of horn players and pays tribute to the recently deceased Travis "Trumpet Black" Hill in the liner notes. Music Granola was recorded with Tim Stambaugh at Word of Mouth Studios in New Orleans, a studio that specializes in New Orleans Jazz, R&B, Funk, Latin, Gospel and Brass Band.

Music Granola is available on CD from the Louisiana Music Factory and CDBaby, and on MP3 from iTunes, CDBaby, and Amazon.