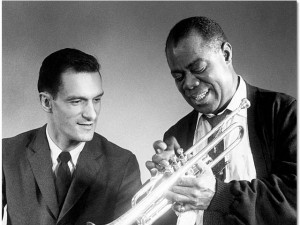 Hugh Hefner and Louis Armstrong in 1959 [Photo from patty-farmer.com] 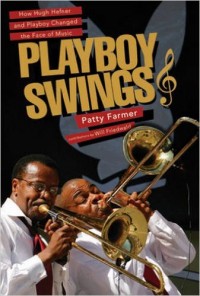 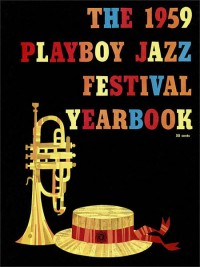 [From patty-farmer.com]
by Nita Ketner

At first blush, it is tempting to dismiss Hugh Hefner and Playboy as nothing more than purveyors of “skin rags.” But Hef’s self-described “pleasure primer styled to the masculine taste” became the most successful magazine of the second half of the 20th century. At its peak, it boasted 7 million subscribers - and not merely for the gorgeous women it featured in its glossy pages. The magazine offered new work from writers Norman Mailer, Ray Bradbury, and Kurt Vonnegut, among many others, and turned visual artists Leroy Neiman, Shel Silverstein, and Alberto Vargas into household names. The average Joe who previously only aspired to sophistication now had a guidebook that would advise him on music, movies, books, and gadgets, and offer tips on how to dress, mix cocktails, and other tools of seduction that, when mastered, might land him a Bunny-like creature of his very own.

However, the magazine was only the first of many ventures for Playboy Enterprises. Interviewing a host of musicians, magazine and club personnel, and former Bunnies, Patty Farmer, the author of new book Playboy Swings!: How Hugh Hefner and Playboy Changed The Face of Music, pieces together a fascinating tale of daring innovation that also led to a trailblazing TV show, a popular music festival, and a chain of high-end nightclubs, all of which served to push Hef’s first true love – jazz - further into the mainstream.

General interest magazines of the day did not cover jazz; it was relegated to specialty publications such as Down Beat and Metronome. The very first issue of Playboy, published in late 1953, included an illustrated profile on the vocal group the Dorsey Brothers, and within its first year it ran in-depth articles on Louis Armstrong and New Orleans’ Storyville District, where jazz and sex intersected in mutually beneficial ways. Playboy’s subscription base, which went from 54,000 to 1,000,000 in just five years, embraced it. While Down Beat and other magazines featured a critics’ poll to determine the best in jazz, Playboy offered the first readers’ poll ever, in 1957. The inaugural year saw Louis Armstrong, Stan Kenton, and Stan Getz taking the top prizes.

As the author points out, “Thanks to its intelligent and relentless coverage of the genre, Playboy helped turn jazz into something that sophisticated young men listened to on their newly purchased hi-fi systems while holding martinis. Needless to say, you can’t dance while you’re holding a martini, so jazz became something that smart people sat still for, paid attention to, and developed opinions about.”

Hef’s TV show Playboy’s Penthouse debuted in 1959. A typical episode opens on a party in progress inside a well-appointed bachelor pad high atop a Chicago skyscraper. Lenny Bruce may be chatting up a couple of lovelies. There’s Nat “King” Cole, not sitting on a bench behind a piano, singing, but on the sofa next to best-selling author Rona Jaffe, telling her how much he is looking forward to reading her new book. Ella Fitzgerald might stop in, or maybe Tony Bennett, or Sammy Davis, Jr. Blacks and whites held conversations, danced and laughed together at Hef’s parties. Because of this, many Southern television stations refused to carry the program, and major corporations balked at purchasing advertising. The show lasted just two seasons, though it would be revived in 1968.

Also in 1959, Hef staged the very first Playboy Jazz Festival with a line-up of venerable talent that included Count Basie, Duke Ellington, Louis Armstrong and Ella Fitzgerald, Miles Davis, Cannonball Adderley, Sonny Rollins, and loads more for an event that jazz critic Leonard Feather called “the greatest three days in the history of jazz.” Though the festival was a smashing success, it wasn’t resumed for another 20 years, as Hef and his partners had new ambitions to pursue: opening a chain of Playboy Clubs.

The first Playboy Club opened in Chicago in 1960. The New Orleans club was the third to open, in 1961, at 727 Iberville Street, in the French Quarter. It was franchised out, and the owners, backed by state law, firmly adhered to the segregation laws of the times. Hef wouldn’t stand for racist practices and quickly bought the club back from the franchise holder – at great expense – and summarily defied the law. “There was a big outcry when Hef opened the clubs to blacks—protests from local members that it wasn’t right,” remembers one musician who worked there. “[Hef] just said, ‘Then leave. Just go. Forget it. Don’t even come back here.’” He hired native son Al Belletto to lead the house band and book the talent. Belletto hired Ellis Marsalis’ trio, and put together bands that included bassists Richard Payne, Chuck Badie, and Bill Huntington, and two youngsters who would become legends in New Orleans music: drummer Johnny Vidacovich and bassist Reggie Scanlon. “No one in New Orleans really liked modern jazz at all, and there was very little audience for it at the time, but Al and Playboy began to change that,” remembers Huntington. “It was a big deal to hire a black man for a steady job, six nights a week. And in such a prominent place as the Playboy Club! So Al not only promoted good music and great musicians, but he advanced civil rights—which was really an unpopular thing to do down here, you know.” The club operated for 20 years, and was a favorite hang-out for local and touring musicians, NFL players and other celebrities.

They may have not have known it at the time, but Hugh Hefner and company were setting the blueprint for what today is known as “branding.” The subtle but ubiquitous Bunny logo became a stamp of approval for sophisticates everywhere: it stood for the finer things in life, including jazz music. That the genre had such a dedicated and influential fan who made it his mission to put it in the spotlight was a blessing for fans and the music alike. And readers of Playboy Swings! will be delighted that Farmer applied the same passion in meticulously documenting the phenomenon.

Playboy Swings!: How Hugh Hefner and Playboy Changed The Face of Music is available at all of the finer bookshops in town, as well as at Amazon.