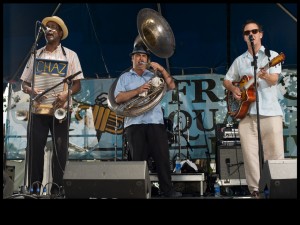 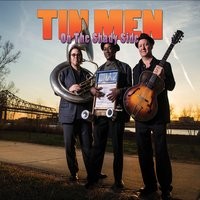 Like many musicians in New Orleans, the members of the Tin Men have a lot going on. Percussionist/vocalist Washboard Chaz is also part of the Washboard Chaz Trio, Palmetto Bug Stompers, and Washboard Rodeo. Chaz is also known for the annual Chaz Fest he puts on in the Bywater each year during Jazz Fest time. Sousaphonist Matt Perrine also performs with the New Orleans Nightcrawlers and pops up onstage with a multitude of artists around the city. Guitarist/vocalist Alex McMurray performs solo and with the Write Brothers, The Valparaiso Men's Chorus, Royal Fingerbowl, and others, and has been compared to Tom Waits for their competing "whiskey-throated" voices and interests in the darker side of life.

Central to each of their efforts, though, is The Tin Men, a trio that has been performing together since 2002. Last week, they released their fourth CD, On the Shady Side, a fitting addition to their eclectic discography which touches on influences from the pop music lexicon, R&B, swing, jazz, Motown, and even heavy metal. The new release keeps its focus on a few easily recognizable classics like "I'm in Love Again" and "On the Sunny Side of the Street" with bluesy sounds on tracks "Papa Was A Rascal" and "Got Me A New Love Thing." The album as a whole has an easy, laid-back ambiance makes it easy to imagine the trio is chilling on the porch on a hot summer night and throwing a few back while enjoying each other's company and musicianship.

On the Shady Side is available on CD at the Louisiana Music Factory and digitally at CDBaby.

Nice write up Carrie - love the video link too.