Big Freedia bio "God Save the Queen Diva!" out now 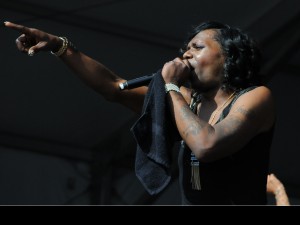 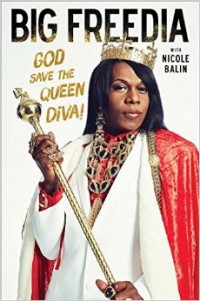 This fabulous new autobiography, “God Save the Queen Diva,” is a breezy page-turner that not only reveals the evolution of Freddie Ross, Jr. to Big Freedia the Queen Diva: it delivers an insider’s look at the development of New Orleans’ bounce music scene. All throughout, the reader can hear Freedia’s booming voice, as if she is in the room reading aloud. She is a deft storyteller as she recalls her life up to now, and she unapologetically embraces the idiosyncrasies of New Orleans: “We make definitions that work for us here.”

Born January 28, 1978, to Vera, a hairdresser, and his namesake, a delivery truck driver, young Freddie knew he was gay as a toddler. He came out at the age of 13 to his mother: she already knew. Though she was troubled by the hardships her son would face living as an openly gay black man, she also loved him fiercely.

Freedia came of age when New Orleans was known as “The Murder Capital.” As she puts it, he was “surrounded by church, family, music and food. And violence.” But as with so many native New Orleanians, music was a salvation, and it quickly became the core of his life. As a ten-year-old, he got involved with Pressing Onward Baptist Church in his Central City neighborhood, and not just with choir. He practically single-handedly initiated, organized and executed to diva-like perfection a number of fundraisers for the church, including a legendary Valentine’s Day kids’ fashion show. The women of Pressing Onward were crucial in developing Freddie’s sense of self, lending spiritual and emotional support to the overweight, teased child. By the time he was a teenager, he was earning excellent grades at Walter L. Cohen High School, where he made the cheerleading squad (and from whence one of his catchphrases, “Girl, down!” was born) while continuing to conduct his church youth choir and hold down a job at Burger King. At the same time, Freddie was experiencing an increasingly stressful home life as he became more openly feminine: his step-father was loathe to accept the lip gloss, the hairstyles, the purse, and it led to family fracases.

Smack dab in the middle of all of this was an exploding bounce music scene. Freedia recalls her first experience with the style, when her friend, Addie, introduced her to MC T Tucker’s song, “Where Dey At,” in 1992. It was the “triggerman” beat that captivated her. “We were transfixed because it was so defiant,” she recalls, “so wrong.” Soon he and Addie were hitting the clubs, even though they were both underage. They met close friend and frequent collaborator Katey Red around this time, and later, Magnolia Shorty and Sissy Nobby. In these chapters lie some of the book’s juiciest storytelling. And in a twist to the old Parliament-Funkadelic motto of “Free Your Mind and Your Ass Will Follow,” Freedia explains that the ethos of bounce music doesn’t require you to free your mind first: In order to free your mind, you must first “release your wiggle.”

It’s no surprise that Freddie took his positive, formative experiences and wove them into a flourishing career. At the heart of Big Freedia’s persona one still sees the creative, industrious, vulnerable soul of Young Freddie. He was simply born to be himself – she literally woke up like this.

“God Save the Queen Diva” validates the case for believing in yourself as your own personal journey unfolds. It underscores how essential it is for young people to have supportive, caring adults in their lives. Big Freedia’s success serves as a blueprint for anyone struggling against the tide of what is considered “normal.” She minces no words and makes no excuses. “Just Be Free!” the Queen Diva commands. Indeed.

Big Freedia will be appearing on Friday, July 10 at Octavia Books for a reading and book signing. More info: http://www.nola.com/music/index.ssf/2015/06/big_freedia_schedules_new_orle.html.

Rolling Stone has a lengthy excerpt from the book which you can preview here: http://www.rollingstone.com/music/news/big-freedia-reflects-on-miley-cyrus-coming-out-in-new-memoir-20150701