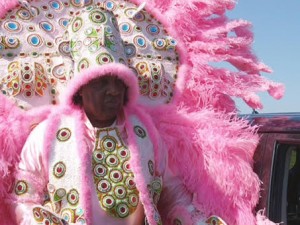 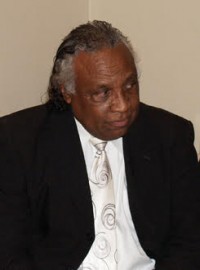 Born in 1932, Tom reminisced about his earliest interactions with the Indians in a 2015 Offbeat Magazine article by Geraldine Wyckoff:

"When I seen them, I was right behind them," he remembers. His childhood curiosity in the culture was also sparked by the fact that his mother was a full-blooded Native American of the Cherokee nation. "That's how I got started in it," he says adding that she didn't approve. "She couldn't stop me. I was gone." In 1947, the teenaged Sparks became the flagboy of the Bumble Bee Hunters and stayed with the tribe until he went into the military to serve in the Korean War. The gang came out of the 7th Ward and the Chief remembers meeting now-legendary Indians and gangs like Allison "Tootie" Montana's father, Alfred, who pulled the Monogram Hunters as well as Black Benny and Brother Tillman.

Sparks was a New Orleans treasure. In addition to participating in the Mardi Gras Indian tradition for over 70 years, he was a devoted father, loving husband, master carpenter, member of the Masons and a Korean era Army Veteran.  She served as an advisor to the Mardi Gras Indian Hall of Fame and mentor to all who sought his knowledge and wisdom on any topic. He was a humble man and devout Christian. His travels as a Mason and Mardi Gras Indian took him throughout the country and to international destinations. Sparks was also an Avian Fancier (racing pigeon handler) who constructed custom lofts, a passion he shared with fellow Mardi Gras Indian Big Chiefs Eugene "Junior" Thomas, Jr., White Eagles (deceased) and Clarence "Delco" Dalcour, Creole Osceolas.

He was a master carpenter who held membership in the Carpenters Union. He built his home in New Orleans East in the 1970s and rebuilt it single handedly after Hurricane Katrina. The original Mississippi River Bridge, Super Dome, and Morial Convention Center are among the many notable projects he worked on during his long stellar career as a master carpenter.

Big Chief Tom was the recipient of many awards and honors, including recognition by the US Senate, Louisiana Legislature, New Orleans City Council and the Masons. He was the recipient of the Mardi Gras Indian Hall of Fame’s Crystal Feather and award for masking over 50 years.

Services will be held on Saturday at Charbonnet Funeral Home (St. Phillip & Claiborne). Visitation will happen from 8-11a and services will start at 11a.