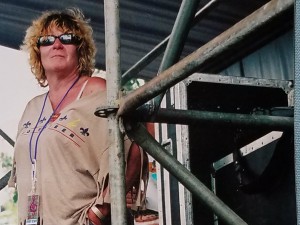 Barbara A. Gillmor passed away on March 3, 2018 at the age of 62. Barbara was a longtime New Orleans enthusiast who moved here in the 1960s. Upon arrival, she knew-- "NOLA Til Ya Die," as she often said.

Barbara's flamboyant spirit and soul touched many. She was a dedicated mother whose influence extended to the neighborhood kids, as well. She was very involved with Kenilworth Park, Lake Castle, and Holy Angels. Barbara's professional accomplishments included owning/managing "Chef Tavern" on Chef Menteur Highway (renamed Minotaurs later). Her involvement in the bar/restaurant business continued with the St. Louise Grocery on Dumaine St. and the Clematis Bar. Barbara spent many years in the French Quarter, meeting her cast of characters and crew.

Barbara was also heavily involved in the entertainment industry via Palmetto Productions, "Siren to Wales" Hep C benefit, French Quarter Fest (1988-2014), and the New Orleans Jazz & Heritage Festival. It was through her work in the entertainment industry that she would meet one of her husbands, Walter "Wolfman" Washington. She managed him for a time, and the pair married in 2004.