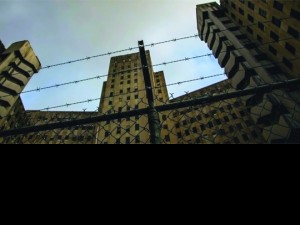 One of the most anticipated films at this year's The New Orleans Film Festival, which wraps up this week: the documentary Big Charity: The Death of America's Oldest Hospital, which recounts the history of the 300-year-old public hospital and its tragic demise.

Here's a synopsis offered by the filmmakers:

Founded as a hospital for the poor, Charity Hospital began in 1736 as just a small cottage built on the goodwill of a dying French merchant. Run by the nuns of The Daughters of Charity and serving the city of New Orleans for close to 300 years, it gradually transformed into an enormous public institution—into Big Charity—and a longstanding symbol of compassion, a seemingly eternal place of safety and a beacon of hope in the community. Today the towering art deco building, closed abruptly after Hurricane Katrina hit in August 2005, stands empty, and the community continues to suffer devastating consequences from its absence.

Big Charity includes never-before-seen footage and exclusive interviews to tell the story of Charity Hospital, from its roots to its controversial closing in the wake of Hurricane Katrina. From the firsthand accounts of healthcare providers and hospital employees who withstood the storm inside the hospital, to interviews with key players who helped shut it down, Big Charity shares the untold, true story around its closure and sheds new light on the sacrifices made for the sake of progress.

Big Charity , which won a festival award for Best Louisiana Feature, will be screened twice this week, at 6:30p at the Joy Theater on Tuesday, October 21 and Wednesday, October 22. The initial allotment of tickets sold out, but more tickets have been made available.