Guardians of the Groove 5: Queen Reesie and Maryse DeJean 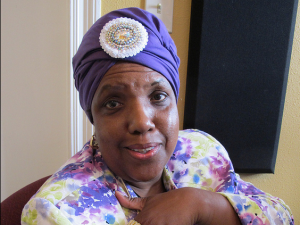 Cherice Harrison-Nelson at WWOZ in 2012.

The newest installment of "Guardians of the Groove" (see below for more on the series) aired on WWL-TV last night (February 27). Cherice Harrison-Nelson, known to many in the Crescent City as Queen Reesie, sat down with WWOZ show host Maryse DéJean. Her father is Big Chief Donald Harrison, Sr.; she talks about making those beautiful suits and masking on Mardi Gras Day.

The first segment aired on September 18, 2013 and featured Benny Jones, Sr. of the Treme Brass Band, interviewed by WWOZ show host Bill DeTurk on location at the Candlelight Lounge.

The forth segment aired on January 16, 2014. WWOZ's Jellyroll Justice talked with master teacher and legendary jazz singer Germaine Bazzle about the origins of her singing style and the joy of teaching students.