Guardians of the Groove 4: Germaine Bazzle and Jellyroll Justice 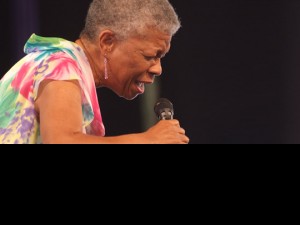 The newest installment of "Guardians of the Groove" (see below for more on the series) aired on WWL-TV last night (Jan 16). WWOZ's Jellyroll Justice talked with master teacher and legendary jazz singer Germaine Bazzle at Snug Harbor, about the origins of her singing style and the joy of teaching students.

The first segment aired on September 18, 2013 and featured Benny Jones, Sr. of the Treme Brass Band, interviewed by WWOZ show host Bill DeTurk on location at the Candlelight Lounge.