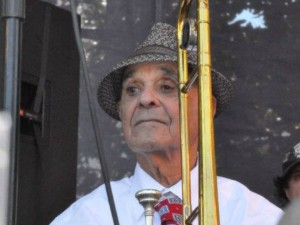 Wendell Eugene passed away on Tuesday, November 7, at the age of 94. Mr. Eugene was one of the most well-respected and longest-serving trombonists in the traditional jazz community in New Orleans.

Eugene was born in New Orleans in 1923 and served in the Navy during World War II. He performed with the Navy's marching and concert bands and was proud to perform with Louis Armstrong during a USO show in 1943. In the late 1940s, he played with the Lucky Millender Orchestra and Buddy Johnson Orchestra, then took a job as a United States Postal Service worker in 1949. Eugene also taught music at the New Orleans Grunewald School of Music, and toured with the Onward Brass Band, Olympia Brass Band, Tuxedo Brass Band, and Andrew's Hall Society Jazz Band.

He played on hundreds of records, including many produced by Allen Toussaint, and performed at the first New Orleans Jazz & Heritage Festival in 1970-- and many others following that first one. As a nonagenarian, he played regularly with Lionel Ferbos' Palm Court Jazz Band (and surpassed Mr. Ferbos as the oldest working musician in New Orleans after his death in 2014), Andrew Hall's Society Jazz Band, and Gregg Stafford's Tuxedo Jazz Band.

Services will be held Saturday, November 11 at Transfiguration of the Lord Catholic Church (2212 Prentiss Ave). Visitation starts at 8:30a, followed by a Mass at 10a. Interment will be at Mt. Olivet Cemetery. Charbonnet Funeral Home is in charge of arrangements.