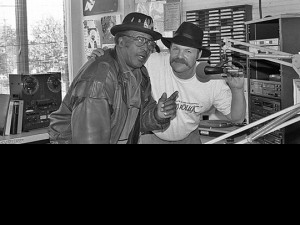 Ready Teddy and Bo Diddley at the WWOZ studio in Armstrong Park. Photo by Al Kennedy.

Simply stated, they do not make them like Ready Teddy McQuiston any more. Do you hear me? They DO NOT. This was a man with more energy and more aliveness (if that's not a word, it is now) than entire counties and parishes. It's hard to believe that he's gone. Back when I arrived in New Orleans, Teddy was one of the jocks who defined what 'OZ was, could be, and might be, when 'OZ was a scrappy, underdog, wild mix of music and attitude that was held together with luck, spirit, coat hangers, duct tape, and the good graces and guiding spirits of the music and musicians. Teddy was old school with those cool catch phrases that everybody knew. He said that he was “hanging like a spider on the wall, like wet clothes on a clothesline,” and then would throw down a rap that made him sound like the second coming of Wolfman Jack, sound like the crazy D.J.s from those million-watt cross-border stations in Mexico. He didn't invent that stuff, but he sure put a perfect spin on them. And then he'd throw on some 45s of some early rock 'n' roll or rhythm and blues that made my radio pulse like Earl Palmer's bass drum, like Teddy's beating heart that was so strong you could hear it over the airwaves.

He sweated for this radio station and the music, and you could hear it in every syllable. I can never forget in the midst of some fund drive and the music is wailing and Teddy's got the mic on and he's so into it that he's screaming “PLEDGE! PLEDGE! PLEDGE!” over and over as if his life and my life depended on it. For all I know, he's still screaming it now. Some day some aliens on a planet in the next galaxy will receive that radio signal. I hope they will hear in it that we are a wise yet fun planet, a compassionate one. Imagine what they'll think if their first impression of Earth is Ready Teddy. It could be a lot worse. I can still hear that voice any time that I press the microphone button and the red “On Air” sign lights up. As I'm introducing records on WWOZ and trying to make them and me sound hip, I can hear Teddy's voice in my head saying, “Get LOUD! Get CRAZY! YOU GOT TO MEAN IT!”, and then I'm trying to sound smoother, wackier, more profound in explaining why these songs mean so much to me. As many have realized, he's a tough act to live up to, a difficult DJ to follow. As much as I try, I can't do it, but neither can most people, so we're not alone.

And he walked the walk as well as talked the talk. Little Richard comes to town, and Teddy is hanging with him and getting onstage with him singing and doing handstands, headstands, and who knows what other kinds of contortions. Solomon Burke plays Jazz Fest, and Teddy is sitting next to him at the autograph tent cutting up and joking with him. Those were heavy hitters, musicians who invented how this great black music is done, performers whose recordings and live performances are some of the pinnacles of Western Civilization, and there is Ready Teddy cracking dirty jokes with them and escorting them around town.

And Ready Teddy didn't just hang with the stars. He was as enthusiastic and interested in the less famous musicians too. Not all musicians in New Orleans have the fame of a Neville or an Andrews. Most are talented players working tourist traps on Bourbon Street or weeknights at assorted bars and dives all over Orleans, Jefferson, and St. Bernard Parish. Teddy knew all these folks and played their music and promoted their gigs. I think he got off on the music and the people who make it whether they did it at the House of Blues or Joe's House of Blues, on Napoleon or Hessmer or Jefferson Highway. Those were his people as much as Little Richard. And he never forgot about them.

So look out, Goddess, start dusting off your Bo Diddley records and Muddy Waters 45s. Get that turntable plugged in and prepare your microphones to live permanently in the red. Reddy Teddy is on his way, and he's going to rock, rap, and jive your radio station up there like few have done before. Move over Fast Eddie, Reverend Ike, Dr. Daddy-O, and Wolfman. Make room for Ready Teddy on your program schedule. And I'll bet that, when the wind is right, and the spider is on the wall, and we concentrate really hard, we'll hear him too.

Wonderful article, David. Thank you for writing this. Teddy was one of a kind, indeed. I'll miss being on-air and having him call in 5 times in 20 minutes asking/demanding me to plug his gig at the Deck bar not this wednesday, not next wednesday but 2 wednesdays after that, followed by "try and get it in by the top of the hour" Don't realize how much you miss silly things like that until they're gone... I once strolled by cafe negril and my friend Wolf Hodges threw a guitar in my hand and made me play stormy monday? or some blues tune WITH Reddy Teddy!! Proud to say I had that honor!

Great stuff, David! Alive and kicking! I hope that more like it come out for the public.