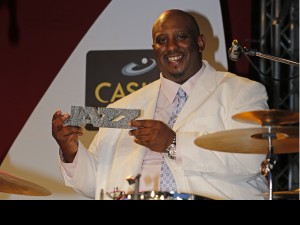 Congratulations to Gerald French, winner of the 2013 JazzAscona Award, presented at this year's JazzAscona Festival. The festival has been held annually in the lakeside town of Ascona, Switzerland for the last 29 years. Previous recipients of the award include Lillian Boutte (2006), Father Jerome LeDoux (2007), Donald Harrison, Jr. (2008), Shannon Powell and Herlin Riley (both in 2010), Uncle Lionel Batiste (2011), and Irma Thomas (2012). JazzAscona, having a long term relationship with New Orleans music, features many of our hometown artists, and selects one to honor each year, who shows "artistic quality and profound commitment to preserve and promote the culture and music versatility of the Crescent City" (www.jazzascona.ch).

Gerald has played so many years in Ascona that he considers it his home away from home. This year he brought The Original Tuxedo Jazz Band to perform June 22 - June 28 at the festival. Gerald became leader of the band when his uncle, drummer and former WWOZ show host Bob French, stepped down as bandleader in 2011, after 34 years of drumming for Tuxedo. Bob inherited the leadership of Tuxedo when his father (Gerald's grandfather), banjo player Albert "Papa" French passed away in 1977. Papa French became Tuxedo's bandleader after trombonist Eddie Pierson held the reins from 1954-1958. Tuxedo Jazz Band was founded 103 years ago, in 1910, by legendary cornetist Oscar "Papa" Celestin, who led the band until his death in 1954. Today it stands as the longest continuously playing band in New Orleans.

Below is a video of Gerald French accepting his award at JazzAscona and an interview filmed in Switzerland, courtesy of JazzAscona.