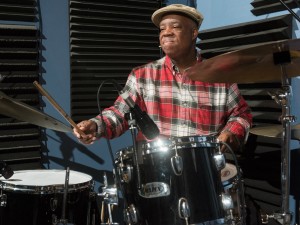 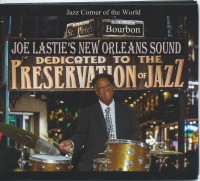 Drummer Joe Lastie, member of the Lastie musical family and known for his work with Preservation Hall Jazz Band, has released Jazz Corner of the World with Joe Lastie’s New Orleans Sound. The album features the first 10 tracks of songs within the traditional New Orleans songbook by people who personify this music and its connection to the city. These tracks are polished and presented in a way that allows for some improvised experimentation, yet still feeling authentic to the core of these timeless New Orleans songs. It comes as no surprise the skill in which this lineup of musicians can tackle these songs that have been in their repertoire for decades.

Joe Lastie’s New Orleans Sound features Kid Merv Campbell on trumpet and most of the vocals, Louis Ford on clarinet, Rickie Monie on piano, Richard Moten on bass, Calvin Johnson on soprano sax and some vocals, Steve Walker and Jerome Jones on trombone, and Big Chief David Montana and some Preservation Hall members on the last track, penned by Lastie, ‘New Orleans In Me.’

The album opens up with a plucky number called ‘Back Home In Indiana,’ where Lastie’s drums lead into a delightful swing complete with daring and powerful soloing from clarinetist Louis Ford, whose playing is impeccable. Kid Merv’s trumpet follows and then the piano of Rickie Monie dazzles the listener before going back into the main melody for an upbeat and swinging beginning to the record. Kid Merv Campbell lends his deep raspy vocals to over half of the songs, and whether it’s the low, slow rasp on ‘Do You Know What It Means To Miss New Orelans?’ and ‘What A Wonderful World’ or his energetic scat-singing on ‘All Of Me,’ Kid Merv Campbell is vital to amplifying Lastie’s distinct and authentic New Orleans sound.

Other highlights include ‘Bourbon Street Parade,’ where Lastie takes a liberating drum solo that keeps the swinging beat alive while Lastie tears it up as if his life depended on it. Complete with Kid Merv’s vocals, this Bourbon Street narrative speaks to the niceties of the older, fantasized version of Bourbon Street. Calvin Johnson’s vocals and saxophone are featured on ‘Ice Cream,’ a fun-loving and innocent number that swings and keeps the party going throughout the record.

Overall, Lastie’s approach and interpretation of these songs demonstrates a precision in his playing and the candor in which Lastie can speak through these songs that help shape and define New Orleans, a narrative that Lastie has certainly defined as his own.

Jazz Corner of the World is available on CD and mp3 from iTunes, Amazon, and Louisiana Music Factory.