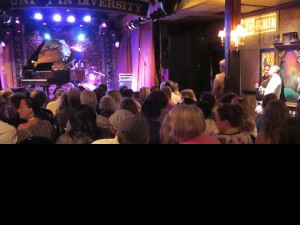 The Parish at the HOB packed on Piano Night

We're two weeks from WWOZ's Piano Night at the House of Blues, a night which celebrates the New Orleans piano tradition.

If you'd like to know more about that tradition, here are a couple of video introductions. The first is a lecture/performance by Tom McDermott (who's playing again this year at Piano Night), recorded at Tulane last July. It's pretty long (nearly an hour) but rewards the investment of time.

Here's a shorter piece, a clip from the film Piano Players Rarely Ever Play Together, a documentary portrait of three great New Orleans pianists (Tuts Washington, Professor Longhair and Allen Toussaint) and how they influenced one another's music. This clip features the latter two.

If you'd like to share other material about the New Orleans piano tradition--video or otherwise--please tell us about it in the comments.